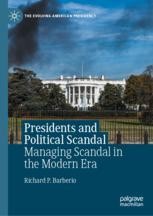 Managing Scandal in the Modern Era

This book explores presidential power through an analysis of the ways that U.S. presidents attempt to manage scandals. While presidents routinely stonewall to block or limit investigations into their alleged transgressions or, in some cases, cooperate with investigators, this book proposes the existence of a third way of responding to scandals—a “backfire” or the creation of a counter-scandal to try to extinguish the original scandal. The existence of possible backfires is surveyed through case studies of the major scandals that impacted the Nixon, Reagan, Clinton, and Trump administrations. The development of this form of scandal response has meaningful implications concerning the growth of presidential power and its impacts on the functioning of the U.S. political system and the quality of American democracy. Changes in partisanship, the media environment, and the public’s view of the presidency and government are topics covered in the book’s explanation of the trends in scandal responses.

Richard Barberio is Associate Professor of Political Science at the State University of New York's College at Oneonta, USA. He writes widely and teaches on American political institutions and processes, and is the author of The Politics of Public Policy (2014).

“Usual ways in which American presidents have responded to scandals involve either denial or acquiescence. This timely book adds to our knowledge and interest about contemporary White House scandals by probing a third strategy—misdirection or creating a ‘backfire’—which can temporarily succeed even as it corrodes already vulnerable institutions within the U.S. political system. Though there may never be universal virtue, this tome is dangerously reassuring in conveying the message that there will always be vice.”
—Samuel B. Hoff, George Washington Distinguished Professor Emeritus, Delaware State University, USA
“Richard Barberio has written a fast-paced and fascinating study of modern presidential scandals.  Stonewalling, pseudo-cooperation, and now misdirection, he demonstrates, are the main instruments in the tool-kit of scandal management by the White House. Case studies on Presidents Nixon, Reagan, Clinton, and Trump explore the varieties of presidential scandals and their outcomes. The Trump case is the highlight of the book, as a wily and dishonest president employs misdirection—shifting blame to others—to survive two dangerous scandals in a row. In an era of fierce partisan polarization, in which scandals have come all too often to shadow presidents of both parties, Barberio has provided a valuable guide to these explosive events.”
—Bruce Miroff, Professor, University of Albany, State University of New York, USA
“If you believe that presidential scandals are too distinctive to bend to systematic analysis, this remarkable book will change your mind. Richard Barberio has furthered our understanding, not just of scandals, but of the modern presidency, including how presidents through ‘backfire’ and other strategies manage to contain the damage resulting from their misconduct. Presidents and Political Scandal belongs on the reading list of leaders, scholars, and citizens alike.”
—Thomas E. Patterson, Bradlee Professor of Government & the Press, Harvard University, USA