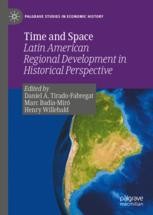 This edited collection examines the evolution of regional inequality in Latin America in the long run. The authors support the hypothesis that the current regional disparities are principally the result of a long and complex process in which historical, geographical, economic, institutional, and political factors have all worked together. Lessons from the past can aid current debates on regional inequalities, territorial cohesion, and public policies in developing and also developed countries.

In contrast with European countries, Latin American economies largely specialized in commodity exports, showed high levels of urbanization and high transports costs (both domestic and international). This new research provides a new perspective on the economic history of Latin American regions and offers new insights on how such forces interact in peripheral countries. In that sense, natural resources, differences in climatic conditions, industrial backwardness and low population density areas leads us to a new set of questions and tentative answers.

This book brings together a group of leading American and European economic historians in order to build a new set of data on historical regional GDPs for nine Latin American countries: Argentina, Bolivia, Brazil, Chile, Colombia, Mexico, Peru, Uruguay and Venezuela. This transnational perspective on Latin American economic development process is of interest to researchers, students and policy makers.

Daniel A. Tirado-Fabregat is Professor of Economic History at the University of València, Spain. His broad research interests include the historical roots of regional economic development and inequality.

Marc Badia-Miró is Associate Professor of Economic History at the University of Barcelona, Spain. His research interests refer to economic geography, trade and natural resources in historical perspective, mainly focused on Latin America.