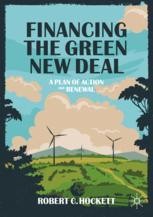 A Plan of Action and Renewal

Climate scientists have determined that we must act now to prevent an irreversible and catastrophic climatic tipping point, beyond which neither our own nor many other species can be assumed likely to survive. On the way to that bleak ending, moreover, extreme socio-economic injustice and associated political breakdown—now well underway in nations already hard-hit by environmental crisis—can be expected to hasten as well.

The time has thus come to plan carefully, thoroughly, and on a scale commensurate with the crisis we face. This book, written by one of the key architects of the Green New Deal and prefaced by Representative Alexandria Ocasio-Cortez's former Chief of Staff, indicates how to structure Green New Deal finance in a manner that advances the cross-cutting goals of maximum financial and economic inclusion, maximally democratic decision-making, and an appropriate division of roles both among all levels of government and among public and private sector decision-makers.

Integrating into one complete and coherent financial architecture such bold ideas as a 'People's Fed,' an interdepartmental National Investment Council, integrated state and regional public banks, a Democratic Digital Dollar and digital Taxpayer Savings and Transaction Accounts made part of the monetary policy transmission belt, and an economy-wide Price Stabilization Fund, this book is critical reading for policymakers and citizens looking for a fresh path forward towards a revived and sustainable, progressive and productive America.

Robert C. Hockett is Edward Cornell Professor of Law and Professor of Public Policy at Cornell University, USA. He is also Senior Counsel at Westwood Capital, a socially responsible investment bank, and a Visiting Professor of Finance at Georgetown University’s McDonough School of Business. Formerly with the Federal Reserve Bank of New York and the International Monetary Fund, his principal teaching, research, and writing interests lie in the fields of organizational, financial, and monetary law and economics in both their positive and normative, as well as their national and transnational, dimensions. His guiding concern in these fields is with the legal and institutional prerequisites to a just, prosperous, and sustainable economic order.

“In the closing words of The General Theory, John Maynard Keynes declared:

‘... the ideas of economists and political philosophers, both when they are right and when they are wrong, are more powerful than is commonly understood. Indeed the world is ruled by little else. Practical men, who believe themselves to be quite exempt from intellectual influences, are usually slaves of some defunct economist.’

Bob Hockett's mission in this powerful treatise is to free us from defunct, orthodox thinking about the purposes of public and private finance, the supposed incompatibility of justice and efficiency, and the putative divergence of prosperity and sustainability. All of these false tradeoffs, he shows us, are just that: false. The key is to get the finance right.

“Critics of the Green New Deal, including many from the left, once objected that tackling both climate change and economic inequality simultaneously would make failure in both domains more likely. No longer. The unfolding COVID-19 pandemic has made clear that the far bigger risk, as Robert Hockett has argued for years, lies in failure to meet these challenges together and now.

Many also once worried that Americans would be unwilling to undertake the required WWII-scale mobilization that a Green New Deal would entail. But because a massive infusion of public investment will be required to revive our economy in any event, we now ask, why not focus that investment on our most pressing problems? —again as Robert Hockett has long asked.

Even having mustered the will to act, however, the required mobilization will be a dauntingly complex financial and logistical undertaking. In painstaking detail, Bob Hockett’s masterful blueprint shows how to do it.” -Robert H. Frank, Henrietta Johnson Louis Professor of Management, Cornell University; Author, Under the Influence: Putting Peer Pressure to Work

“As the old saying has it, ‘Any jackass can kick down a barn, but it takes a carpenter to build one.’ After half a century of misguided demolition of the financial architecture that underpinned shared national and global prosperity, public purpose finance has found a master builder as well as a master scholar in Robert C. Hockett.” -Michael Lind, Professor, Lyndon B. Johnson School of Public Affairs, University of Texas at Austin; Author, Land of Promise: An Economic History of the United States

"State investment is often driven by a national mission to boost development or security—think of the railway boom, the creation of the interstate highway system, or the development of the internet, all of which were fueled by the public sector. In this important new book, Robert C. Hockett lays out how to do industrial policy, American-style, and tells us why a Green New Deal is crucial to the future of not only U.S. economic growth, but liberal democracy itself." -Rana Foroohar, Global Economic Analyst, CNN; Global Business Columnist and Associate Editor, Financial Times

“You might disagree with some of these proposals, as do I. But you cannot afford to ignore them. Anyone who wants a sustainable future will have to develop means of assuring it that are as creative and ambitious—as 'out of the box' –as these.” -Robert J. Shiller, Nobel Laureate and Sterling Professor of Economics, Yale University