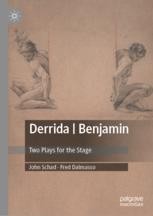 Two Plays for the Stage

Within the work of both Jacques Derrida and Walter Benjamin there is a buried theatricality, a theatre to-come. And in the last fifteen years there has been a growing awareness of this theatricality. To date, though, there has not been a published stage play about either Derrida or Benjamin

Cue Derrida| Benjamin, a volume that brings together two tragi-comic plays which mirror each other in a host of ways – above all, in the way that the central philosophical figure is displaced, or not quite where or when we would expect to find them. In Derrida’s case, it is Oxford in 1968; in Benjamin’s case, it is somewhere (or nowhere) near London in 1948. These, then, are plays in which the philosopher is exiled, or elsewhere – not quite himself.

This a volume for anyone with an eye or ear for where theatre or performance meets philosophy – students, scholars, readers, actors.

Fred Dalmasso is Lecturer in Drama at Loughborough University, UK. He is a screenwriter, theatre director, and performer. He has worked in the theatre industry in both France and Ireland and is now the artistic director of the performance group collect-ifs. His publications focus on practice-based theatre translation, performance philosophy and include Syncope in Performing and Visual Arts (2017).

“Readers of philosophy will adore these witty and informative plays based on the thoughts of two of the most influential thinkers of the past century: Jacques Derrida and Walter Benjamin. Soon, you may even find yourself producing and acting in them.” (— Graham Harmon, Distinguished Professor of Philosophy, Southern California Institute of Architecture, USA)

“The genius of these plays is to eject the philosopher’s page-bound words into vocal performance, thus ripping them from contexts, splicing them in new ones, and refracting them amidst the whirls of large-scale historical events, and in dialogue with the intimate dramas of everyday love and loss, of people, contexts, memory and minds. That is to return them to life, as philosophy should be.” (— Esther Leslie, Professor in Political Aesthetics, University of London, Birkbeck, UK)

“Haunting has no limit, it seems; or so we are reminded by these two remarkable plays. Both have moments of darkness and terror, but these are fundamentally comedies, made out of theory as Kafka made them out of theology. To read these plays is both to stage them in the mind and to long for actors and a material stage.” ( —Michael Wood, Charles Barnwell Straut Class of 1923 Professor of English and Comparative Literature, Princeton University, USA)

“This book offers new insights—performative and conceptual ones—into Derrida’s and Benjamin’s engagements with theatre in ways that are elegant, expansive, and original. Fittingly, for two thinkers obsessed with ghosts and indeterminacy, theatre and philosophy are engaged in a mutual haunting in this text, each being entangled in and with the other.” (—Professor Carl Lavery, University of Glasgow, UK)