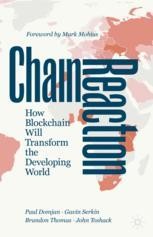 How Blockchain Will Transform the Developing World

Amidst the constant stream of overly technical and excitable books heralding a blockchain revolution that’s destined to be more disruptive than the Internet, this book stands apart for its more nuanced take, focusing on the potential for these new technologies to change developing countries for the better. Chain Reaction divides the world into two: for some, blockchain seems a poor substitute for an efficient banking and regulatory system in which transactions are settled instantly and contracts are underpinned by solid institutions. For others, it will be truly life-changing – namely those living in countries where rule of law is weak, concepts of ownership are vague and, consequently, trust in institutions is in scarce supply.

With blockchain, we are about to witness a leapfrogging – one that will bring the next billion emerging consumers into the formal economy by creating reliable institutions of contract, ownership and trust among people previously denied such luxuries.

The authors humanize the technology by taking the reader on a global journey through a multitude of applications – from registering property to voting and delivering aid. In place of the usual abstract lessons in complex technology, this book is instead filled with lively anecdotes of places where trust is so weak that a crisp dollar bill sells at a premium to a better-used version. The book’s goal is to create the first truly approachable, entirely comprehensible and enjoyable read on the wonders to come from blockchain.

Paul Domjan consults and advises on strategy, growth, innovation and scenario planning. He is a Senior Associate at NormannPartners and Scenario Contributing Analyst at Tellimer and was CEO of 4Cast-RGE. He has advised the UK, US and many developing country governments; was a Marshall Scholar at Oxford University; and is a frequent guest lecturer on emerging markets and digital themes. He spent the second half of 2019 traveling overland across southern and eastern Africa with his spouse and primary school aged children while writing this book.

Gavin Serkin has been a prominent commentator on frontier and emerging markets for over two decades. His first book, Frontier: Exploring the Top Ten Emerging Markets of Tomorrow, was acclaimed as a “must read” by the Financial Times. Gavin’s work leading Bloomberg journalists uncovering derivatives that triggered the global financial crisis won him the Society of American Business Editors & Writers’ Best in Business Award and the Society of Professional Journalists’ Deadline Club Award. Subsequently creating and leading Bloomberg’s emerging markets team, Gavin founded New Markets Media & Intelligence in 2015 to help drive responsible investment to developing markets.

Brandon Thomas is an entrepreneur and executive with over 20 years experience developing and managing businesses in numerous industries, from retail to government to media. He has a passion for disruption and has found himself at the center of many of the seismic technological shifts that have occurred in recent decades, from the rise of data in politics to the emergence of software-as-a-service (SaaS) to the ubiquitous nature of social media. Brandon first came across blockchain in 2014 while managing US operations for a China-based private equity fund. From there, he has been researching, advising and investing in the space between the emerging blockchain ecosystem and its interface with traditional organizations. Brandon is currently Partner of Grayline Group, a firm that brings together experts, data, and solutions to help companies and public institutions manage disruptive change. He is also founder of Blockview Partners, a consulting and investment advisory firm focused on understanding and supporting “the next wave” of cryptocurrency investments.

John Toshack is Managing Director at APQ Global Limited, focussing on the company's investments in technology and innovative businesses. Prior to joining APQ Global, John had a career spanning more than 15 years with the HSBC Group where he held a number of senior roles in the Global Markets division and gained significant expertise in financial structuring, emerging markets and energy commodities. He holds profession qualifications issued by FINSIA and ICMA and is an alumnus of the University of Sydney and the Said Business School, University of Oxford.