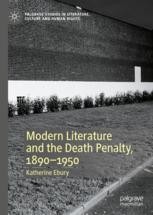 This book examines how the cultural and ethical power of literature allowed writers and readers to reflect on the practice of capital punishment in the UK, Ireland and the US between 1890 and 1950. It explores how connections between ‘high’ and ‘popular’ culture seem particularly inextricable where the death penalty is at stake, analysing a range of forms including major works of canonical literature, detective fiction, plays, polemics, criminological and psychoanalytic tracts and letters and memoirs. The book addresses conceptual understandings of the modern death penalty, including themes such as confession, the gothic, life-writing and the human-animal binary. It also discusses the role of conflict in shaping the representation of capital punishment, including chapters on the Easter Rising, on World War I, on colonial and quasi-colonial conflict and on World War II. Ebury’s overall approach aims to improve our understanding of the centrality of the death penalty and the role it played in major twentieth century literary movements and historical events.

Katherine Ebury is Senior Lecturer in Modern Literature at the University of Sheffield, UK. Her previous publications include Modernism and Cosmology (2014) and Joyce’s Non-Fiction Writings (2018), as well as several articles and chapters. The present volume has been generously supported by an AHRC Leadership Fellowship.

"Through an impressive range of literary works, legal cases, and primary sources, Katherine Ebury's important book offers a fresh and powerful interpretation of how the death penalty changed the modernist literary landscape, and how modernism took up the ethical problems raised by its imposition. Ebury’s work sheds light on the submerged juridical and political charge in narrative, connecting it deftly to its historical moment and revealing the intimate ties between literature and law."

"Katherine Ebury leads us through a compelling discussion of the death penalty in literature in the first half of the twentieth century, drawing on a rich range of publications, from golden-age detective fiction to memoir to canonical works, such as Richard Wright’s Native Son. Ebury puts these works into rewarding conversation with key thinkers of the era in sociology, psychoanalysis and legal theory. In doing so, Ebury provides valuable new perspectives on how the death penalty operated as subject and trope within literature and larger discourses of crime and punishment. Chapters on Executioners’ life-writing, for example, and the place of animals in thinking about capital punishment, transform our understanding of those discourses in surprising and fruitful ways. Modern Literature and the Death Penalty, 1890-1950 is essential reading for anyone interested in the place of the death penalty in the Anglo-Atlantic cultural imagination of the twentieth century."

"In rigorous and fascinating detail, Katherine Ebury shows the profound influence that literature’s responses to the death penalty had on public debates about capital punishment. Ebury’s discussion of the ambivalence that authors such as Agatha Christie, Dorothy Sayers, and Elizabeth Bowen had towards to the death penalty shows us new aspects of some of the twentieth century’s most influential writers about crime and the psychological subject. With this book, Katherine Ebury breaks new ground, bringing together high modernist and popular literature to show the effect of psychoanalysis on writers’ discussion of criminality and capital punishment."