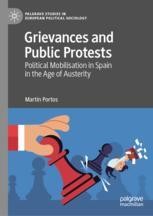 Political Mobilisation in Spain in the Age of Austerity

This book sheds light on the role that grievances play for mobilisation dynamics in a context of material deprivation. Why do people protest? To what extent do grievances account for the varying size of protest events over time? Covering different levels of analysis, the author argues that effects of socioeconomic aspects (both objective-material deprivation and subjective-attitudinal grievances) are mediated by political attitudes, especially political dissatisfaction. He develops a framework to account for the dynamics, trajectory and timing of the cycle of contention that unfolded in Spain in the shadow of the Great Recession, contributing not only to the field of social movement studies but to our broader understanding of European politics, political sociology, political economy and economic sociology.

Martín Portos is Research Fellow at the Scuola Normale Superiore in Florence, Italy. He is the recipient of the Juan J. Linz Best Dissertation Award in Political Science, CEPC (Government of Spain). His work appeared in international peer-reviewed journals including Acta Politica, American Behavioral Scientist, European Societies, Mobilization and Regional Studies. He is co-author of Social Movements and Referendums from Below: Direct Democracy in the Neoliberal Crisis (with D. della Porta, F. O'Connor and A. Subirats Ribas, 2017).

“This is an impressive book that makes both theoretical and empirical contributions. Based on a variety of micro- and macro-level data and sophisticated statistical analyses, it provides a quite original message: in the depth of the Spanish economic crisis, it was not economic grievances that motivated Spaniards of different walks of life to participate massively in protests. Instead, it was political grievances that were motivating them and that eventually led them to support new challenger parties.” (Hanspeter Kriesi, European University Institute, Italy)

“The important new book of Martín Portos provides readers with a fascinating contribution to our general theoretical analysis of social movement mobilisations and our specific understanding of the Spanish case. Making use of his wide-ranging multi-method research and the rigorous examination of various types of data, Portos engages insightfully with existing theorizations and improves on them in various ways.  The result is a major in-depth contribution that will be required reading both for those who follow social movement studies and those who care about contemporary Spain and southern Europe.” (Robert M. Fishman, Carlos III University, Madrid, Spain)

“This volume is a must-read for anyone interested in the political consequences of the Great Recession or on recent Spanish politics. It addresses the relationship between austerity-related grievances and protest mobilization using an extensive array of data and methodologies. It is an impressive effort of data analysis that highlights the importance of political dissatisfaction in the context of assessing the consequences of economic upheaval.” (Eva Anduiza, Universitat Autònoma de Barcelona, Spain)

“This remarkable book shows, if need be, that protest is a political phenomenon and, therefore, should be studied with political rather than economic categories. Martín Portos skilfully shows that, even in times of economic downturn, political grievances matter, determining the ways ordinary citizens get involved in politics. His analysis of the Spanish case offers lessons and food for thought that go well beyond this specific context.” (Marco G. Giugni, University of Geneva, Switzerland)

“Martín Portos’ work offers a most needed contribution for rethinking important concepts and theoretical approaches in social movement studies. Bringing grievances, and more broadly the structural bases of political conflicts, at centre stage, he points however at the importance of the political mobilization of those grievances. The data presented are extremely rich, allowing to address the question of the roots of the protests at different levels. As the need to study politics in times of big challenges is emerging again as most relevant for the analysis of the effects of the pandemic on political participation, this volume also offers a model for the organization of meaningful empirical research.” (Donatella della Porta, Scuola Normale Superiore, Italy)