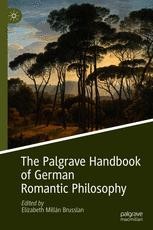 This Handbook provides a comprehensive and authoritative analysis of the philosophical dimensions of German Romanticism, a movement that challenged traditional borders between philosophy, poetry, and science. With contributions from leading international scholars, the collection places the movement in its historical context by both exploring its links to German Idealism and by examining contemporary, related developments in aesthetics and scientific research. A substantial concluding section of the Handbook examines the enduring legacy of German romantic philosophy.

• Emphasises the important role that women played in the movement’s formation. • Reveals the ways in which German romantic philosophy impacted developments in modernism, existentialism and critical theory in the twentieth century. • Interdisciplinary in approach with contributions from philosophers, Germanists, historians and literary scholars.
Providing both broad perspectives and new insights, this Handbook is essential reading for scholars undertaking new research on German romantic philosophy as well as for advanced students requiring a thorough understanding of the subject.
Show all
About the authors

Elizabeth Millán Brusslan is Professor of Philosophy at DePaul University, USA. Her research focuses on aesthetics, German Idealism/Romanticism and Latin American philosophy. Her previous publications include: Friedrich Schlegel and the Emergence of Romantic Philosophy (2007) and (with Bärbel Frischmann) Das neue Licht der Frühromantik/The New Light of German Romanticism (2008). In addition, Professor Millán Brusslan contributed “Borderline Philosophy?  Incompleteness, Incomprehension, and the Romantic Transformation of Philosophy” to the International Yearbook of German Idealism, Vol. 6  (2009) and has published many articles on the relation between German Idealism and the development of early German romantic philosophy.