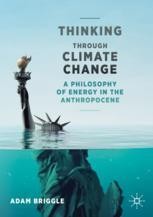 A Philosophy of Energy in the Anthropocene

In this creative exploration of climate change and the big questions confronting our high-energy civilization, Adam Briggle connects the history of philosophy with current events to shed light on the Anthropocene (the age of humanity).

Briggle offers a framework to help us understand the many perspectives and policies on climate change. He does so through the idea that energy is a paradox: changing sameness. From this perennial philosophical mystery, he argues that a high-energy civilization is bound to create more and more paradoxes. These paradoxes run like fissures through our orthodox picture of energy as the capacity to do work and control fate. Climate change is the accumulation of these fissures and the question is whether we can sustain technoscientific control and economic growth. It may be that our world is about change radically, imploring us to start thinking heterodox thoughts.

Adam Briggle is Associate Professor and Director of Graduate Studies in the Department of Philosophy and Religion at the University of North Texas. He is the author of A Rich Bioethics (2010) and A Field Philosopher’s Guide to Fracking (2015).

“With Thinking through Climate Change, Adam Briggle consolidates his position as a leader in the new generation of scientifically savvy environmental philosophers. He distinctively takes the argument for environmentalism to the heartland of its smartest opponents by considering the future of energy and the future of humanity as an indissoluble whole. In graceful, even literary prose, he manages to severely question whether 'Necessity is the mother of invention' will really be able to save us in the end. As someone in Briggle's line of fire, I will be recommending this book to my students.” (Steve Fuller, University of Warwick, Author of Humanity 2.0)

“I know of no better introduction to the philosophical conundrum of trying to figure out how to live in the midst of energetic climate mutation. As Briggle deftly puts it, we are faced with a conflict between two ideals --- orthodox (increase energy production and use) versus heterodox (reduce energy) --- that implicate much more than energy politics and policy. The choice is between alternative visions of what it means to be human.” (Carl Mitcham, International Professor of Philosophy of Technology, Renmin University of China)

“Public discourse on climate change has been stuck in an ever-narrowing vortex for nearly three decades, the Cassandras on one side and the Panglossians on the other.  What’s desperately needed is an inventive, humane, learned, and above all generous voice to help us get past this idiotic impasse and actually start to know what it would mean to take climate change seriously.  Enter Adam Briggle.” (Daniel Sarewitz, Professor of Science and Society, Arizona State University, USA, and editor of the Issues in Science and Technology journal)

Book Title
Thinking Through Climate Change
Book Subtitle
A Philosophy of Energy in the Anthropocene
Authors
Series Title
Palgrave Studies in the Future of Humanity and its Successors
Copyright
2021
Publisher
Palgrave Macmillan
Copyright Holder
The Editor(s) (if applicable) and The Author(s), under exclusive license to Springer Nature Switzerland AG