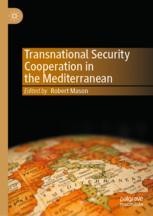 Transnational Security Cooperation in the Mediterranean

This volume draws together academics and think tank experts to explore the revised European Neighborhood Policy (ENP) and EU Global Strategy (EUGS) towards the Southern Neighborhood, in the context of the Arab Uprisings and conflict, counter-terrorism cooperation, the Mediterranean refugee crisis, energy developments in the Eastern Mediterranean, shifting interactions with and between international partners, and the fallout from Covid-19. Covering aspects such as actorness, power and alliances, history, socioeconomics, domestic politics, regime security, and the regional security complex, the authors provide a comprehensive and theoretically rich analysis of EU policy inputs, southern neighborhood interests and responses, as well as new strategy proposals aimed at enhancing human security. The volume will appeal to European and Middle East studies students, international relations scholars and policy professionals alike.

Robert Mason is Associate Professor and Director of the Middle East Studies Center at The American University in Cairo 2016-19.

“Transnational Security Cooperation in the Mediterranean calls on states and the EU to transcend short-term securitised approaches to relations between the southern and northern sides of the Mediterranean. Contributors to the volume provide a series of up-to-date analyses of the wide range of issues and actors affecting security cooperation in the wider region. Provides important lessons for the EU in the post-Codvid-19 pandemic era.”

“Robert Mason’s book helps us to better understand one of the most complex – and dangerous – security environments in the world today. In what has become a very crowded European ‘neighbourhood’, with Russia, China, Turkey and the Gulf countries flexing their muscles as never before, the countries of the Middle East and North Africa are struggling with all manner of threats to their stability and development. Mason contributes a well-informed analysis of those threats and provides some useful suggestions for the EU on how best to help deal with them.”

“This is a truly relevant book for anyone interested in obtaining in-depth understanding of some of the most crucial contemporary security dynamics in the EU’s southern neighbourhood and their impact both on the region and Europe. Against the backdrop of growing fragmentation and disorder in the regional and international system, and by bringing together junior and senior researchers, this volume offers an eclectic array not just of key EU policies towards individual Arab Mediterranean countries in policy fields such as counterterrorism, migration and energy. It also offers fresh perspectives on how the EU’s southern neighbourhood has increasingly turned into a playground – and in parts even a battlefield – for a variety of external actors, competing for influence, power and resources, thereby rendering the EU’s most recently adopted attempts at resilience building ever more arduous.”

“Robert Mason’s book is definitely going to enrich the debate on and understanding of this complex area of constantly shifting sands. It has the advantage of giving a very broad view of the question. From a geopolitical point of view, it provides a thoroughly useful insight into South-South relationships in the Southern Mediterranean and, beyond this, of the role of other international actors in the region. On top of the “usual suspects”, it also explores the rise of influence of relative newcomers in the region such as India or Japan. Delicate and burning questions on security and counter-terrorism cooperation, or the race for energy access in the Eastern Mediterranean are deeply and subtly addressed. Last but not least, in the conclusion, the author opens up avenues with respect to the future of a possible EU approach towards Southern Mediterranean ENP. Definitely a must-read for policy-makers and academics working in this field.”