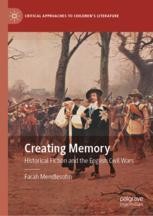 This book considers the English Civil Wars and the civil wars in Scotland and Ireland through the lens of historical fiction—primarily fiction for the young. The text argues that the English Civil War lies at the heart of English and Irish political identities and considers how these identities have been shaped over the past three centuries in part by the children’s literature that has influenced the popular memory of the English Civil War. Examining nearly two hundred works of historical fiction, Farah Mendlesohn reveals the delicate interplay between fiction and history.

Farah Mendlesohn is Associate Fellow of The Anglia Ruskin Centre for Science Fiction and Fantasy, UK. She has a PhD in History, focusing on the Spanish Civil War She was Professor and Head of Department of English and Media at Anglia Ruskin University, from 2012-2017. Previous books include Rhetorics of Fantasy (2009) and Diana Wynne Jones: The Fantastic Tradition and Children’s Literature (2009).

"This is a wonderful read, which not only establishes itself as the dominant authority in its field, but conveys in the process both the excitement of the stories and the importance of the history with which it deals." (Ronald Hutton, Professor of History, University of Bristol, UK, and author of The Royalist War Effort (1999) and The British Republic 1649-1660 (1981))

"This is a book that could probably only have been written by one person. The result is an invaluable book: a clear and fascinating discussion, full of detail but driven by enough ‘big data’ to be able to make more general statements and draw conclusions with a confidence seldom warranted in literary criticism. I know of no other book that has attempted something quite like it. Most of the texts discussed are neither well known nor easily available; their discussion and contextualisation is invaluable for anyone working in the historical fiction of the Civil War, and more largely for anyone thinking about the ways that the arguments involved political and historical events change over subsequent generations." (Catherine Butler, Reader in English Literature, Cardiff University, UK, and author of Reading History in Children’s Books (2012))

"In this important new book, Farah Mendlesohn offers an informative and highly readable answer to a question which has long since cleaved to Britain’s century of conflict and revolution: what were the lasting political, social, and cultural legacies of that climacteric? The author embarks on the kind of long-term approach which has been largely absent from existing studies. Here, the focus is predominantly children’s literature; a profound influence on popular memory of the British Civil Wars since the seventeenth century. From the start, the author directs our attention to a constellation of moral and political judgments to which sporadic eruptions of civil war-based fiction have contributed ever since the events in question. Mendlesohn thus shows that the intersecting divisions of the 1640s and 1650s wrought scars which remained visible in Britain long after the end of the Stuart dynasty. One of successes of this work is to investigate fictional accounts of the Civil Wars in light of recent historiography which has shown the diversity of experiences depending on class, gender, and geography. This is likely to remain among the most comprehensive and rewarding histories of the cultural influence of the British Civil Wars. It provides a catalyst to further research into the longer-term legacies of civil war and revolution in Britain." (Edward Legon, Lecturer in Heritage Management, Queen Mary University London, UK, and author of Revolution Remembered: Seditious Memories After the British Civil Wars (2019))