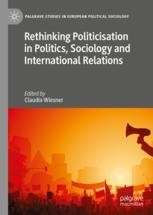 This book decisively advances the academic debate on politicisation beyond the state of the art. It is the first book to theorise and conceptualise ‘politicisation’ across the epistemic communities of different subdisciplines, bringing together the different strands in the debate: (international) political theory, political sociology, comparative politics, EU studies, legal theory and international relations. This provides a comprehensive discussion of different concepts of politicisation, their ontological and theoretical backgrounds, and their analytical value, including speech-act, practice- and actor-oriented approaches. Furthermore, the linkages of politicisation to the concepts of politics and the political, democracy, depoliticisation, juridification, populism, and Euroscepticism are clarified. Finally, the book shows how the methodological toolbox in empirical politicisation research can be completed regarding different arenas, actors and modes of politicisation. The volume thus provides a much-needed theoretical and conceptual reflection to the newly emerging research field of politicisation in order to recognise and define the key issues and build a solid foundation for further debate and empirical research.
‘When does something come to be considered political - for good or for ill? In social scientific terms, what is politicisation, under what conditions does it occur, created by whom, and with what consequences. These questions drive this outstanding collection of papers that explore how politicization is to be theorized and methodologies for its study. Rather than just a special sphere of activity, the volume demonstrates how politics is best thought of as an activity that can occur across individual and various collective levels. One of the signature contributions of this volume is its exploration of these issues across disciplines: political science, philosophy, sociology and international relations. The texts will be of interest to all students of politics at a time when the very basis of political identity, action, and organization is contested, normatively and analytically. The texts will help bring clarity to these debates.’

‘Politization has become a widely used and disputed term In International Relations (IR) and more recently in comparative politics as well. This edited volume tries to elevate the term politization onto an analytical concept by i.a. opening it up for action theoretical and organizational approaches. One of the great achievements of the editor is to bring conceptual order into a dispersed debate across political science and its subdisciplines. Moreover, the contributions show how to apply the concept(s) of politization on such different subjects such as democratization, de-democratization, transitions, denationalization or the emergence of populism and Euroscepticism. This is a muchawaited book which can become a conceptual point of reference for better understanding the evolution of national and international regimes.’