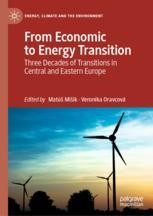 From Economic to Energy Transition

Three Decades of Transitions in Central and Eastern Europe

This book examines energy transition issues within the Central and Eastern European (CEE) region. The European Union is aiming for an almost complete decarbonization of its energy sector by 2050. However, the path towards a carbon-free economy is full of challenges that must be solved by individual EU members. Across 18 chapters, leading researchers explore challenges related to energy transition and analyse individual EU members from Central and Eastern Europe, as well as the region as a whole. To further explore this complex issue, the volume also includes several countries from South East Europe in its analysis. As perspective members, these countries will be important contributors to the EU’s mid- and long-term climate and energy goals. The focus on a variety of issues connected to energy transition and systematic analyses of the different CEE countries make it an ideal reference for anyone with a general interest in the region or European energy transition. It will also be a useful resource for students looking for an accessible overview of the field.

Matúš Mišík is Assistant Professor at the Department of Political Science at Comenius University in Bratislava. His main research interests include energy security in the EU and the role of perception within EU decision-making mechanisms. He is the author of External Energy Security in the European Union (2019) and has published articles in major energy policy journals.

Veronika Oravcová is Research Assistant at the Department of Political Science at Comenius University in Bratislava and Research Fellow at the Slovak Foreign Policy Association. Her research interests are centered on energy transition and energy security in Central and Eastern Europe.

Countries of Central and Eastern Europe tend to be lumped together due to their post-Communist legacy rather than any objective geographical or political features. Whereas comparative analyses of policy in Europe often contain a case study of the ‘CEE’ as merely one chapter, on par with Denmark, Ireland or Luxembourg, this excellent volume opens the black box of ‘the New EU’ with an eye on nuance and diversity. Thirty years since the regime change is the perfect time to take stock, and a thorough analysis of the dynamics of energy transition in the region is of the highest policy relevance for the EUʼs decarbonisation ambitions. Written by experts, analysts, and practitioners, this coherent and timely collection will be a key reference for years to come.

The book is unique in several ways. Above all, it offers the most comprehensive and in-depth look at issues of energy transition in the countries of Central and Eastern Europe currently available in academic literature. Prominent experts mostly from the region analyse the specifics of their countriesʼ energy policies. I recommend this book to anyone who wants to better understand the approaches of the CEE countries to the ambitious goals of the EUʼs climate and energy policy, including why they are a little different than those of the ‘oldʼ member states.

This timely book demystifies the widely held assumption of a uniform approach towards energy transition in Central and Eastern Europe. The topic is carefully unpacked through an in-depth and historically sensitive analysis of virtually all countries of the region and from a rare combination of disciplinary perspectives. This volume is therefore a must-read for anyone interested in the politics of energy transition in this part of the world and beyond.