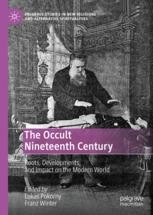 Roots, Developments, and Impact on the Modern World

The nineteenth century witnessed a proliferation of alternative religious currents and practices, appropriating earlier traditions, entangling geographically distinct spiritual discourses, and crafting a repository of mindscapes eminently suitable to be accommodated by later generations of thinkers and practitioners. Penned by specialists in the field, this volume examines important themes and figures pertaining to this occult amalgam and its resonance into the twentieth century and beyond. Global guises of the occult, ranging from the Americas and Europe to India, are variously addressed, with special attention to the crucial role of mesmerism and the origins of modern yoga.

“This impressive volume makes an important contribution to the understanding of occult concepts in the nineteenth century, their origins, and their influence on modern culture. … The volume represents a compilation of highly original scholarship, being a valuable and muchrecommended addition to the study of occultism and esotericism.” (Nicole Maria Bauer, Religious Studies Review, Vol. 47 (1), March, 2021)

“This impressive volume demonstrates the globally entangled and boundary-shattering nature of what we have come to know as ‘alternative spirituality.’ Meticulous historical analyses of mesmerism and occultism are combined with comparative and transcultural perspectives on theosophy, yoga, and new religious movements and the relations between art, esotericism, medicine, and politics, to show just how central ‘the occult’ really was to the formation of modern culture. The study of occultism and spirituality will never be the same again.” (Egil Asprem, author of The Problem of Disenchantment: Scientific Naturalism and Esoteric Discourse, 1900–1939)

“This wide-ranging collection of essays provides a major contribution towards understanding and appreciating the importance of the occult—as a style of thought and a mode of acting—approached as a global phenomenon. Its historical focus underscores the importance of the ideas, personalities, and movements situated in the nineteenth century as an exceptionally fertile period in the course of which the cross-cultural forms of esotericism encountered and influenced each other.” (Gordan Djurdjevic, author of India and the Occult: The Influence of South Asian Spirituality on Modern Western Occultism)