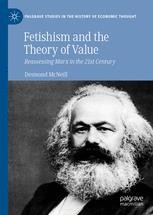 Fetishism and the Theory of Value

Reassessing Marx in the 21st Century

This book demonstrates the continuing relevance of Marx’s critique of the capitalist system, in which value is simply equated with market price. It includes chapters specifically on the environment and financialisation, and presents Marx’s qualitative theory of value and the associated concept of fetishism in a clear and comprehensive manner. Section I demonstrates how fetishism developed in Marx’s writing from a journalistic metaphor to an analytical device central to his critique. In Section II, commodity fetishism is distinguished from other forms: of money, capital and interest-bearing capital. There follows an analysis of Marx’s complex attempt to distinguish his argument from that of Ricardo, and Samuel Bailey. The section ends with a discussion of the ontological status of value: as a social rather than a natural phenomenon. Section III considers the merits of understanding value by analogy with language, and critically assesses the merits of structural Marxism. Section IV challenges Marx’s emphasis solely on production, and considers also exchange and consumption as social relations. Section V critically assesses recent Marx-inspired literature relating to the two key crises of our time, finance and the environment, and identifies strong similarities between the key analytical questions that have been debated in each case.

Desmond McNeill (PhD, economics, University of London) graduated from Cambridge University in 1969. He has been a lecturer at University College London and the University of Edinburgh and recently retired from the Centre for Development and the Environment, at the University of Oslo, Norway, where he had formerly been Research Professor and Director.

"An outstanding and original book."

"If you, like Joan Robinson and like me before I read this book, are inclined to dismiss Marx’s theory of value and fetishism as ‘gobbledygook’, Desmond McNeill’s beautifully written and very accessible book should persuade you otherwise. It deals with one of the most fundamental of social science issues: why we must distinguish (but generally don’t) ‘value’ from ‘price’.  Without this distinction we are bound to superficial explanations of the basic structure of capitalist society, and of major current problems relating to the ‘financialization of everyday life’ and treatment of the environment as a commodity.  McNeill shows how to go deeper."

"This book provides a compelling account of the qualitative nature of Marx’s value theory, drawing upon a wide range of sources. The relevance for contemporary thought and debates is expertly addressed ranging, for example, over the role of value in understanding the environment and financialisation. Discussion throughout is extraordinarily accomplished, well-written, well-informed, a pleasure to read, insightful and of considerable synthetic originality, whilst also connecting the abstract conceptualisation of value to contemporary scholarship and issues."

“Desmond McNeill’s deep and broad learning brilliantly illuminates his exegesis of Marx’s relevance to our understanding of the contemporary capitalist world of neo-liberalism. His application of the themes of fetishism, value, and rent to the understanding of financialization and the plundering of nature are subtle, lucid, and unsurpassed. If I had to choose a single ‘local-tracker’ to help me navigate the contemporary world system, he might well be the best guide. “

"We live in a world of rampant fetishism and alienation, now as much as in the mid-nineteen century when Marx developed his path-breaking analysis of capitalism. Desmond McNeill reveals the enduring power of the fetish to conceal the social, spatial, temporal and environmental dynamics of the most destructive economic system ever created"

-     Noel Castree, Professor of Geography, The University of Manchester

“This brilliant book shows what may still come of a careful reading of Marx and how important it is not to put aside works of genius in the illusion that we already know what they have to offer. Desmond McNeill's lucid and compelling exploration of Marx's idea of value demands to be read not only by economists, but by sociologists and anthropologists. It makes possible a new understanding of fetishism, and in so doing opens fascinating new pathways to social analysis - demonstrably so in respect of the financialisation of everyday life and the incorporation of the 'natural environment' into the world of economics.”

“Desmond McNeill’s volume revisits and extends his earlier intellectual history of Marx’s theory of labour value, basic to Marx's analysis of surplus value or capitalist exploitation. The unexpectedly etymological route of his defence begins with Marx’s use of fetishism as metaphor for the social relations of capitalism. McNeill’s extended epilogue considers the contemporary relevance of such analysis for nature and financialization, arguably the two Achilles heels of contemporary capitalism in the early 21st century.”

-        Jomos KS, Malaysia, winner of the 2007 Wassily Leontief Prize for Advancing the Frontiers of Economic Thought

“Today, more than ever, it is necessary to re-visit why and how our lives are increasingly lived through commodities real and fictitious. This erudite and astute reading of Marx’s notion of fetishism is precisely what is needed in order to recover the experience of the social that lurks within the simulacrum of the thing.”

-      Erik Swyngedouw, Professor of Geography, The University of Manchester, UK