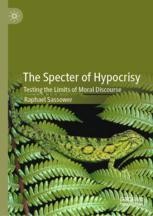 The Specter of Hypocrisy

Testing the Limits of Moral Discourse

Raphael Sassower examines the concept of hypocrisy for its strategic potential as a means of personal protection and social cohesion. Given the contemporary context of post-truth, the examination of degrees or kinds of hypocrisy moves from the Greek etymology of masks worn on the theater stage to the Hebrew etymology of the color adjustment of chameleons to their environment. Canonical presuppositions about the uniformity of the mind and the relation between intention and behavior that warrant the charge of hypocrisy are critically reconsidered in order to appreciate both inherent inconsistencies in personal conduct and the different contexts where the hypocrisy appears. Sassower considers the limits of analytic moral and political discourses that at times overlook the conditions under which putative hypocritical behavior is existentially required and where compromises yield positive results. When used among friends, the charge of hypocrisy is a useful tool with which to build trust and communities.

Raphael Sassower is Professor of Philosophy at the University of Colorado, Colorado Springs, USA. His work focuses on the philosophy of the social sciences, political economy, postmodern technoscience, social epistemology and critical rationalism. His latest publications include The Quest for Prosperity (2017), Democratic Problem-Solving (co-authored with Justin Cruickshank, 2017), and The Impact of Critical Rationalism (co-edited with Nathaniel Laor, 2018).

“When Mark Twain proposed that ‘[a] lie can travel half-way around the world while the truth is putting on its shoes.’ he could never have contemplated the internet age that has rendered discourse unmediated and unrestricted by the boundaries of space and time. Raphael Sassower’s timely reflection on the manifold complexity of hypocrisy could not be more necessary. This carefully constructed argument’s consideration of the implication of falsehoods across multiple registers of life is required reading.”

“In our age of 'phony news' and of the 'post-factual’, Raphael Sassower's new intervention is timely. In this book, he takes on the notion of hypocrisy as a way not only to challenge the current political scene, but more importantly and with more long-lasting reverberations, he challenges the borders of moral philosophy themselves. The relationship between the moral and the hypocritical are here explored, most interestingly between the Greek actor and the Hebrew chameleon."

—Suzanne Stewart-Steinberg, Director of the Pembroke Center for Teaching and Research on Women and Professor of Italian Studies and Comparative Literature, Brown University, USA

“Professor Sassower’s The Specter of Hypocrisy invites the reader to an intellectual celebration. It presents the triumph of humane reasoning over its cynic pretender. It is the most incisive study of one of the most disturbing psychosocial phenomena of our post-truth Trumpian times. Sassower portrays the sad picture of our current human condition as it appears on a global canvas writ large by the American colossal failed response to the COVID-19 pandemic. A wake up call it should be, Sassower says, or else. A society that has lost its compass, one that mixes truth and fallacy, hypocrisy and integrity, irrevocably loses touch with reality and destroys its own social matrix. The remedy he offers is a strong and hard one to swallow. It cuts through all intellectual polarities serving the cultural myths that populate our social, psychological, religious and political theories and practices. Sassower’s analysis of the problem situation is a tour de force. His mastery and depth of research into psychological, psychoanalytic, social, moral, philosophical, and religious theories that pertain to his subject matter is breathtaking. Sassower’s style verges, at times, on the poetic and exceptionally transpires both humane compassion and philosophical modesty. To mend our world, he says, it is all about truth and truth telling—of friends to one another out of caring about integrity and social bonds. No more posturing as friends, but owning up to one’s friendship. Sassower offers us a new intellectual framework allowing degrees of hypocrisy and their empathic truthful discussion. This way we may go on searching for socially astute manipulative self-presentations without giving up on our commitment to the honest quest for ever-improving levels of personal and social integrity. The book is a must-read.”

“If hypocrisy is the horse that has bolted from the barn in our post-truth condition, Raphael Sassower is the ‘horse whisperer’, trying to coax the creature back to its paddock. While Trump has clearly galvanized Sassower into action, his approach to hypocrisy is characteristically very wide-ranging and nuanced—and not entirely unsympathetic. Regardless of what one ultimately makes of the pervasiveness of hypocrisy in today’s society, this is the one book that takes it with the seriousness it deserves.”