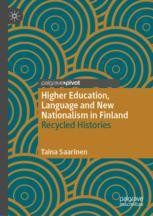 Taina Saarinen is Research Professor of Higher Education at the University of Jyväskylä, Finland. She has published widely on language policies of higher education and contemporary and historical language policies, recently in journals such as Higher Education, Rethinking History, and Language Policy. She particularly enjoys comparative and historically layered topics.

“This fascinating book traces the recycled discourses of language policies in Finnish higher education, unveiling the zeitgeist of different eras: from 19th century nationalism, via post-nationalism and up to one of the most pressing issues of our time – new nationalism. Intelligent and insightful, it is a must-read for anyone who thinks the threat from English is something new.” (Anna Kristina Hultgren, UKRI Future Leaders Fellow and Senior Lecturer in English Language and Applied Linguistics, The Open University, UK)

“Taina Saarinen explores the intensifying intersection between language and nationalism as it relates to higher education. As populist movements strengthen, the author critically unpacks the “new nationalism” emerging in Finland and the multilayered roles of language. Read this book—you’ll never think of language the same way again." (Jenny J. Lee, Professor of Educational Policy Studies and Practice, University of Arizona, USA)

“This book contributes some much-needed fresh air and original ideas in the study of language matters in higher education. Taking Finland as a case study, Saarinen beautifully depicts the multi-layered and intrinsically connected spheres of language and politics at universities, and provides rich, critical, and insightful analyses of old and new nationalist forms in Finnish higher education through the prism of language. A must-read for anyone interested in language and higher education policy.” (Josep Soler, Associate Professor, Department of English, Stockholm University)

“Universities are national and international institutions at the same time. Taina Saarinen’s book reveals how entangled nationalism and internationalism have been constructed at universities when it comes to language. Saarinen analyses profoundly intertwined language use and policies creatively, providing tools not just for higher education and language policy scholars but also for historians, political scientists and others. This is an important book well beyond its thematic and geographical bounds.” (Pasi Ihalainen, Professor of Comparative European History, University of Jyväskylä)