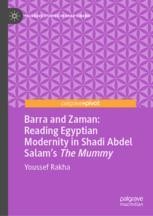 Brilliantly introduced by Nezar Andary, this book is a work of creative nonfiction that approaches writing on film in a fresh and provocative way. It draws on academic, literary, and personal material to start a dialogue with the Egyptian filmmaker Shadi Abdel Salam’s The Mummy (1969), tracing the many meanings of Egypt’s postcolonial modernity and touching on Arab, Muslim, and ancient Egyptian identities through watching the film.

Youssef Rakha is a novelist, poet, journalist, and photographer who writes in both Arabic and English. His work has been widely anthologized and translated into many languages. Born, raised, and based in Cairo, Egypt, Rakha graduated from Hull University, UK, in 1998.

"Youssef Rakha magnificently takes us on an intellectually stimulating and highly entertaining cultural journey through the frustrations and joys of modern Egypt using Shadi Abdel Salam’s masterpiece The Mummy as a tombstone touchstone. As acerbic, exciting, and politically astute as listening to The Last Poets with Godard-esque jump cuts, this stylish text makes traditional critical analysis feel like tales from the crypt."

- Kaleem Aftab, film critic, author of Spike Lee: That’s My Story and I’m Sticking To It

"An electrifying, cubist portrait of a classic film’s place in the world. Youssef Rakha says that Shadi Abdel Salam’s 'The Mummy' embodies 'a twilight zone of Egyptian modernity.' By writing about patriotism, grief, visual beauty, political entropy, colonialism, and sexuality, he brilliantly takes us into that modernity, that zone. Few people write about cinema with such zigzagging bravura or impertinent seriousness; not often do we get such a three-dimensional context for a film. This book will be as valuable to creative writers as it is to devotees of cinema or Egypt."

"An anecdotal and ultimately engaging meander through the imagined pasts and disjointed legacies of Egyptian history, setting out from and repeatedly returning to Shadi Abdel Salam's masterpiece. For Rakha, national identity is framed between an estranged antiquity and a failed modernity. Just as the film starts and ends with mourning scenes, his book is a meditation on grief: that of the author for his father, the nation for its leader, and the youth for their future."

“In this book, Egyptian novelist Youssef Rakha captures the personal relationship with art that lies beneath all scholarly endeavor, but which too often gets lost in academic analysis. The aphoristic prose recalls Derrida and the sad-faced irony of Vonnegut is never far away. Nezar Andary’s foreword adds to the effect by calling up veils and cocoons to imagine how audiences get ‘wrapped up’ in cinema. A thoughtful and moving work of creative nonfiction.”

"In a series of numbered paragraphs loosely following the unfolding of Shadi Abdel Salam’s sole masterpiece The Mummy, Youssef Rakha recounts Egypt’s fraught encounter with modernity. But this is a psychologized double telling, for we see Egypt through two prisms: that of the film’s story and that of Rakha’s autobiography. Both revolve around the search for an expansive Egyptian identity that extends in time and space. And both are painfully aware of the impossible entanglements that shaped that identity in the last two centuries. The superposition of the two narratives deepens the contradictions to the point that the denouement at the end astonishes in its simplicity. But I would not reveal it. Read this erudite, candid, and soul-searching essay to find out."

"I’ve never seen The Mummy, but it’s now one of my favorite films. This is an essay about a movie. It’s also a wonderfully entertaining exploration of Egyptian myths and political realities from Ramses the Great to Mohammed El Baradei, the frankly disappointing, and it’s a cultural autobiography, as Youssef Rakha syncs ideas of colonialism and cosmopolitanism with an elegant reading of modern literature and cinema. Find the film, read Rakha’s books, think about Egypt."