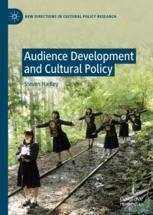 Steven Hadley is an academic, researcher and consultant working internationally in the cultural sector. He is currently a Research Fellow in the Moore Institute, National University of Ireland Galway, Visiting Lecturer at Leuphana University of Lüneburg, Associate Consultant with The Audience Agency, and sits on the Editorial Boards of both Cultural Trends and the European Journal of Cultural Management and Policy.

“This is a wonderful book, situating the goal of audience development into the centre of cultural policy discourse, with a deeply researched history, and new perspectives on contemporary challenges.” (Michael Rushton, Professor of Public and Environmental Affairs, Indiana University, USA)

“Everyone who cares about audiences should read this book. It clarifies some very important ideas about audience development and the place and value of organised culture in society. An eye-opening walk through the history of audience engagement, it is as accessible and wry as it is intelligent and timely.” (Anne Torreggiani, Chief Executive, The Audience Agency)

“This meticulously researched monograph offers a nuanced, behind-the-scenes perspective of the evolution of cultural policies related to audience development. A must read for any serious arts management or cultural policy scholar. Given the importance of democratic access to culture, it is both timely and important.” (Ben Walmsley, Professor of Cultural Engagement, University of Leeds)

“As much as this book is an insightful exploration of audience development, it is a reflexive history of cultural policy. Via the voices of cultural and arts managers, it deconstructs and reconstructs the meaning of audience development as a contested nexus among culture, policy, marketing and social justice. In doing so, the book compellingly urges us to face the fundamental questions: what is culture and how can we make it more democratic?” (Hye-Kyung Lee, Reader in Cultural Policy, King's College London)

“I was nearly afraid to read Steven Hadley’s book because I knew it would turn my world upside down, and it has. His framing of audience development as an unsuccessful and often counterproductive attempt to democratize culture amongst publicly funded organizations is even more relevant in the US where we lack the supposed moral imperative of public funding. When considered in light of the racial justice movement, Hadley’s analysis is incredibly timely and helpful in understanding why the cultural sector is so slow to change, even when everyone knows it has to, and what it would truly mean to make culture more democratic. With his dense, erudite and at times painfully rigorous latticework of interconnected arguments, Hadley disrobes the emperor of colonial culture, thread by thread, until he stands before us naked and fat. And what a shock it is. In this text I see the groundwork in logic for better approaches to institutional planning and evaluation, as well as new and better arguments for alternative structures of cultural production. Those brave enough to read it will be richly rewarded.” (Alan S. Brown, Principal, WolfBrown)

“Steven Hadley has taken audience development out of the marketing suite and put it back on the high street of cultural democracy where it belongs. Rather than a genuflection to a neo-liberal orthodoxy, audience development is repositioned at the intersection of some of the most pressing debates for our culture and our democracy.” (Justin O’Connor, Professor of Creative Economy, University of South Australia)

“Cultural policy generally holds two major goals: to develop excellence and to disseminate the arts and culture to as many people as possible.  Nevertheless, the dissemination purpose is often neglected, albeit with occasional resurgences.  This significant book is one of the few to deeply examine the issue of audience development from a theoretical perspective and shed light on how this important aim of cultural policy gets overlooked.  The book’s approach to audience development - not as an arts management topic but within a cultural policy framework - is both distinctive and refreshing.  A must read for students at all levels and academics in cultural policy research.” (Nobuko Kawashima, Professor, Doshisha University, Japan)

“Audiences have long held a vexed place in cultural policy: often neglected, glossed over and assumed; sometimes targeted and championed… but still largely imagined. With an unprecedented focus on the experience of industry and policy professionals, Steven Hadley describes the ambiguous and ambivalent place audience development has held, and the struggles that have determined its position.” (Katya Johanson, Professor, Deakin University, Australia)

“In cultural policy, the democratic and moral imperative to ensure equality of access to publicly funded culture is a continuous challenge. This book scrutinises the lack of common understanding of audience development within the cultural sectors. As multidisciplinary research, this book provides a valuable analysis of how those practitioners and decision makers involved in audience development interpret and reason it within their specific institutional/professional contexts. It is an important and significant contribution to the research fields of cultural policy and arts management.” (Anita Kangas, Professor Emerita, Department of Social Sciences and Philosophy, University of Jyväskylä, Finland)

“This book marks an original addition to the field of audience development and makes clear how complicated this area is for managers, organisations and funders to deal with. As such it is highly recommended reading for all interested parties.” (Clive Gray, Associate Professor, University of Warwick)

“This is a book that needed writing about a subject that calls out for attention. The finer points about audience development tend to be overlooked in studies of cultural policy - these prefer reiterating the rhetorics to interrogating the realities. This book explores the interstices of those relationships and, as such, should be read by all policy-makers and practitioners working in the cultural sector.” (Sara Selwood, Adjunct Research Fellow, Museum and Heritage Studies Programme, Stout Research Centre for New Zealand Studies, Victoria University of Wellington, NZ)

"In Steven Hadley’s monograph, one is whirled into the history and variety of audience development. It is a nuanced, gifted and profoundly researched book that, better than any other I have read, places audience development in the cultural-political landscape and articulates some very central democratic aspects of the relationship between art, culture and audience. In the time of transition we experience it is both important, relevant and much needed." (Niels Righolt, Director, The Danish Centre for Arts & Interculture)