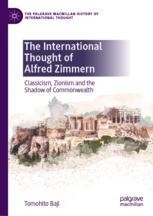 The International Thought of Alfred Zimmern

Classicism, Zionism and the Shadow of Commonwealth

This book is a comprehensive examination into the shifting international thought of Alfred Zimmern, a Grecophile intellectual, one of the most prominent liberal internationalists and the world’s first professor of IR. Identifying the writings of Burke and cultural Zionism as two important ideological sources that defined his project for empire and global order, this book argues that Zimmern can best be understood as an apostle of Commonwealth. It shows that while his proposals changed from cosmopolitan democracy to Euro-Atlanticism and to world federal government, they were constantly shaped by the organizing principles of a professedly universal British Commonwealth. It was the empire transhistorically chained to classical Athens.

Tomohito Baji is Associate Professor in the History of Political and Social Thought at the Graduate School of Arts and Sciences, the University of Tokyo, Japan. His articles have appeared in Modern Intellectual History and the History of European Ideas as well as the several journals of Japanese academic associations.

‘In this excellent book, Tomohito Baji offers a comprehensive and original account of Alfred Zimmern's political thought. Baji ranges widely, covering all phases of Zimmern's extraordinary career, and demonstrating the thread of continuity running through his influential work on ancient history, his contributions to IR, and his arguments about religion, empire, race, citizenship, and the nature of political community. Erudite and insightful, this is an admirable contribution to the history of international thought’.

—Duncan Bell, Professor in the Department of Politics and International Studies, University of Cambridge, UK

‘Alfred E. Zimmern was one of the most important international thinkers of the twentieth century – and one of the most far-ranging. Trained as a classicist, he became an advocate for both the Commonwealth of Nations and Zionism, a prominent internationalist, and a designer of a proposed global constitution. This perceptive book analyses the underpinnings and evolution of Zimmern’s ideas, drawing deeply on his published work and his papers’.