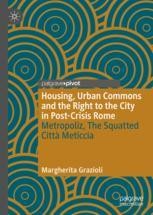 Housing, Urban Commons and the Right to the City in Post-Crisis Rome

This book tells the story of Metropoliz, a vacant salami factory located in the Eastern periphery of Rome (Italy) that was squatted in 2009 by homeless households with the cooperation of the Housing Rights Movement Blocchi Precari Metropolitani, and progressively reconverted into the house and museum spaces that form the Città Meticcia (the mestizo city). Through a vivid activist-ethnographic account, Margherita Grazioli suggests that Metropoliz exemplifies a practice of grassroots urban regeneration that speaks to the conflicted reconfiguration of real estate urban regimes in a post-crisis, post-neoliberal scenario. Using the contentious reappropriation of housing as a point of departure for claiming manifold rights, Metropoliz represents an alternative model of urbanity and habitation that will inspire contemporary urban social movements concerned with the demand of the ‘right to the city’, as well as those concerned with the ontology of the urban commons.

Grazioli's nuanced and contextualised accounts of the 'housing squat' Metropoliz provide an illuminating discussion of the political value that concepts such as 'the right to the city' and 'urban commons' hold for contemporary anti-capitalist struggles. In addition, this book outstandingly shows how fruitful an activist-research approach is to reveal the dynamics and challenges of squatting and housing movements in the Italian context and elsewhere. (Miguel A. Martínez, author of Squatters in the Capitalist City, Uppsala University, Sweden)

As a precise and passionate analytical account of the ways in which mundane built environments can be repurposed for the engendering of inventive forms of collective life, this book is an essential guide to how urbanities might concretely be transformed in support of sustainable justice. In an era that makes constant reference to the commons, Grazioli vividly shows us just what such a commons concretely might be. (AbdouMaliq Simone, Urban Institute - University of Sheffield, UK)

Metropoliz is an 'out-of-place' affirmation: a praxis of inhabiting the city for and of the many. With her beautiful and powerful prose, Margherita not only offers a grounded analysis of the meaning and makings of liberatory forms of housing, but she also shows what it means to research spaces like Metropoliz embodying and reverberating their broader urban politics. This book is a quintessential read for anyone concerned with the future of cities well beyond Rome. (Michele Lancione, Urban Institute - University of Sheffield, UK)