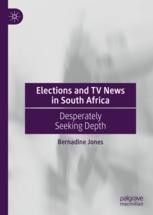 This book takes television news seriously. Over the course of nine chapters, Elections and TV News in South Africa shows how six democratic South African general elections, 1994–2019, were represented on both local and international news broadcasts. It reveals the shifting narratives about South African democracy, coupled with changing and challenging political journalism practices. The book is organised in three parts: the first contains a history of South African democracy and an overview of the South African media environment. The second part is a visual analysis of the South African elections on television news, exploring portrayals of violence, security, power, and populism, and how these fit into normative news values and the ruling party’s tightening grip on the media. The final part is a conclusion, a call to action, and a suggestion to improve political journalistic practice.

Bernadine Jones is Lecturer in Journalism at the University of Stirling, UK. She was the Next Generation in Social Science Fellow at the University of Cape Town where she completed her PhD, and has published on visual analysis methodology, African representation in news, and political journalism during elections. She is proudly South African.

“This is an important book, from a global south perspective, on television coverage of South Africa’s post-apartheid general elections. Jones analyses the troubling mismatch between the issues that mattered to the electorate and the issues that mattered in, and to, the media, and explains why this mismatch occurred. She is deeply committed to moving beyond generalisations about media performance, and the limitations of policy and structural analysis. It is a pleasure to read as it is accessible while being academically rigorous, so it will appeal to a wide audience.“ — Professor Jane Duncan, University of Johannesburg
“With the crisis in mainstream media in South Africa and elsewhere – we journalists should shoulder much of the blame – this timely book places television coverage of general elections in South Africa post-1994 under the magnifying glass, pleads for more depth and proposes ways to improve narratives, visual rhetoric and framing. My hope is that this book will encourage deep introspection and debate among media practitioners from Africa and elsewhere. Jones‘ book is necessary, incisive and informative.“ — Max Du Preez, Journalist

"Those interested in either political journalism or South African politics will find this book a valuable read. It eloquently unpacks how the media constructed their stories of South Africa’s first six post-apartheid elections. Importantly the book also helps build our theoretical understanding of political journalism by critiquing the journalistic practices it uncovers and by suggesting ways that political journalism can be improved." — Professor P. Eric Louw, University of Queensland
"This book chronicles the television coverage of the birth and growth of South African democracy. By contrasting local and international perspectives on one of the most tumultuous and exciting periods in the country’s history, Jones asks questions about how the global mediatization of politics has played out in this young African democracy. Covering more than two decades of history in an engaging and accessible way, the book will appeal to scholarly and general audiences interested in the intersection of politics, media and visual discourse." — Professor Herman Wasserman, University of Cape Town
"South Africa's struggle for freedom was one of the defining events in modern history. It was important not only for South Africans, but globally. In the eyes of the world, its future was our future. South Africa was a beacon of hope that democracy would always eventually triumph. We now live in a different world. Almost 30 years on from the election that brought Nelson Mandela to power, Bernadine Jones explores the legacy of that election, the interplay of politics and the media, and the way the 'foundation story' of South Africa has been mythologised by the ANC. Incisive, and oftimes chilling, it is a wake-up call for those who hoped to see South Africa take its place as a role model for democracy in a world where tyranny thrives, and where nations - once thought to be stalwarts of democratic politics - are falling prey to conspiracists and populists." — Mr Tom Collins, OBE, Journalist