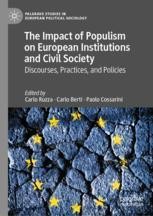 The Impact of Populism on European Institutions and Civil Society

Carlo Ruzza is Professor of Political Sociology at the University of Trento, Italy. He has widely published on radical right populist parties and political movements in southern Europe, particularly in Italy, and on civil society advocacy roles. His current research interests focus on civil society organisations specialising in anti-discrimination and human rights policy at the EU level and the impact of populism on EU institutions.

Carlo Berti is Research Fellow at the School of International Studies, University of Trento, Italy. He holds a PhD in Communication Studies from Auckland University of Technology, New Zealand. His current research focuses on populism and anti-populism in the European Union. His work has been published in international journals such as Journalism Studies and Media, Culture & Society.

Paolo Cossarini is Postdoctoral Researcher at the Department of Culture and Learning, Aalborg University, Denmark. His research focuses on populism and nationalism, Italian and Spanish politics, protest movements, and civil society organisations. He is co-editor of Populism and Passions. Democratic Legitimacy after Austerity (2019).