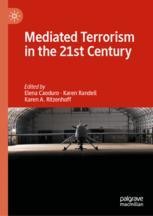 Mediated Terrorism in the 21st Century

Mediated Terrorism in the 21st Century offers new interpretations of figures emerging from representations of terrorism and counterterrorism: the male hero, female agent, religious leader, victim/perpetrator, and survivor. This collection of essays by a broad array of international scholars reflects the altered image-making processes that have developed from George W. Bush’s “war on terror.” Building on current literature on media and terrorism, this volume analyzes the most recent technological developments that have impacted the way we experience terrorism: online videos, social media, cartoons, media feeds, and drones. The authors address different time periods, different terrorist groups, and explore the way filmmakers and television producers from the USA, Europe, South Africa, and the Middle East are documenting modern wars in popular culture.

Elena Caoduro is Lecturer in Media Analysis at Queen’s University Belfast, UK. Her research on contemporary European cinema, analogue nostalgia, trauma, and memory of terrorism has been published in edited collections and journals, including Networking Knowledge, Alphaville Journal of Film and Screen Media, and NECSUS: European Journal of Media Studies.

Karen Randell is Professor of Film and Culture at the University of Bedfordshire, UK, where she is an Honorary Research Fellow of the Research Institute of Media and Performance. She has coedited seven books including The War Body on Screen (2008), Reframing 9/11: Film, Popular Culture and the “War on Terror” (2010), and Screening the Dark Side of Love: From Euro-Horror to American Cinema (2012). She is published in Screen (2003), Cinema Journal 51:1 (2011), and Cinema Journal 56:1 (2016).

Karen A. Ritzenhoff is Professor in the Department of Communication at Central Connecticut State University, USA. She is Co-Chair of Women, Gender, and Sexuality Studies. New Perspectives on the War Film was published by Palgrave in 2019. She has also co-edited The Handmaid’s Tale: Teaching Dystopia, Feminism, and Resistance (2019) and, most recently, Black Panther: Afrofuturism, Gender, Identity and the Re-Making of Blackness (2021).

“Mediated Terrorism in the 21st Century presents provocative analyses of the way terrorism influences our lives through its depictions in popular culture. The chapter authors have written sophisticated examinations of varied media approaches to terrorism, and the variety of their offerings reinforces our understanding of how terrorism has become a nearly ubiquitous presence in the ways we live our lives.”

"The mediation of terror and violence involves narration, sensationalism and invention. This intriguing collection explores these processes from multiple perspectives, encompassing different national and transnational narrations of terror that contextualise and work to dislodge the prominence of the USA and its military/political/mediatized constructions of American vulnerability and strength. The collection spans diverse media (film, television, cartoons, photography, social media) and distinct modes of production, drawing out nuances of what is at stake in narration, remembering and representation. What emerges forcefully is not only a sense of the generic, familiar character of the mediatization of terrorism and political violence, but the importance of memory and creativity in responding both to the traumatic legacies of terror and to its insistent mediatized presence in contemporary cultures."

“Across its eleven scholarly yet accessible chapters Mediated Terrorism in the 21st Century offers fascinating engagements with a range of topics in both depth and breadth, marking it out as a lively, dynamic and original contribution to the field.”