Chinese Literature and Culture in the World
Free Preview 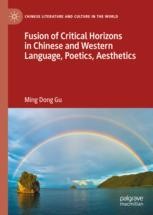 This book begins with a reflection on dichotomies in comparative studies of Chinese and Western literature and aesthetics. Critiquing an oppositional paradigm, Ming Dong Gu argues that despite linguistic and cultural differences, the two traditions share much common ground in critical theory, aesthetic thought, metaphysical conception, and reasoning. Focusing on issues of language, writing, and linguistics; metaphor, metonymy, and poetics; mimesis and representation; and lyricism, expressionism, creativity, and aesthetics, Gu demonstrates that though ways of conception and modes of expression may differ, the two traditions have cultivated similar aesthetic feelings and critical ideas capable of fusing critical and aesthetic horizons. With a two-way dialogue, this book covers a broad spectrum of critical discourses and uncovers fascinating connections among a wide range of thinkers, theorists, scholars, and aestheticians, thereby making a significant contribution  to bridging the aesthetic divide and envisioning world theory and global aesthetics.

Ming Dong Gu is Distinguished Professor of Foreign Studies at Shenzhen University, China, and Professor of Comparative Literature at the University of Texas at Dallas, USA. His recent books include Why Traditional Chinese Philosophy Still Matters (2018) and Sinologism: An Alternative to Orientalism and Postcolonialism (2013).

“In this ambitious study, which should prove central to further work on these topics, Ming Dong Gu challenges the notion of a fundamental opposition between Western and Chinese aesthetics and undertakes a comparative study of a series of important issues in literary aesthetics, illuminating similarities and differences.” (Jonathan Culler, Class of 1916 Professor of English and Comparative Literature, Cornell University, USA)

“Professor Ming Dong Gu has offered a most comprehensive investigation of Chinese and Western studies. His latest book sets a new ground for conceptual and scholarly inquiries into China-West humanities in language, metaphor, representation, aesthetics, and metaphysics, and proposes a paradigm shift from ethnocentric criticism to global aesthetics. Both erudite and provocative, Gu demonstrates a methodology that will inspire anyone interested in comparative studies.” (David Wang, Edward C. Henderson Professor of Chinese Literature, Harvard University, USA)

“This is a timely study showing how to get beyond cultural nationalism in search of the most compelling values of civilizations, aesthetic values. In Chapters devoted to language, writing systems, metaphor, and mimesis, Professor Gu reveals the profound value of genuine dialogue, ‘with due respect paid to the distinctiveness of each tradition.’ Alongside choice insights into core aesthetic concepts, East and West, Gu offers a blueprint for a comparative method rooted in the sober recognition of a shared human condition.” (Martin Powers, Sally M. Davidson Professor of Chinese Arts and Cultures, University of Michigan, USA)

“Comparative studies placing Chinese cultural productions in conversation with those emanating from “the West” all too often fall into simplistic and self-serving dichotomies. The bold ambition of this rigorously argued and wide-ranging study is to historicize and ultimately transcend dichotomous frameworks in order to establish common ground for more inclusive and eclectic visionings of literary and aesthetic theory. In its thorough and systematic analysis of deep-seated methodological habits, it provides both a timely corrective and an invaluable guidepost for future comparative work.” (David Porter, Professor of English and Comparative Literature, University of Michigan, USA)