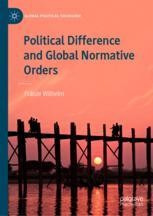 Once considered a question of an international order based on consolidated

order has become a question of alternative political articulations, resistance

movements, and cultural diversity, among others. This book first critically

political and IR theory. Second, to make sense of the presence of difference and

foundations, the study draws on post-foundational thinking based on the seminal

Ernesto Laclau. Finally, the author develops a theoretical framework for a

hauntological approach to global normative order that provides an alternative

and theoretically coherent explanation for the emergence of global order. This is

Fränze Wilhelm is a researcher at the Kiel University Research Group on International Political Sociology.

"Fränze Wilhelm’s book is one of the rare studies in International Relations (IR) employing post-foundational theories to grasp the prospect of a global normative order. The combination of philosophical vocabulary with IR literatures is brilliant, making this book a must-read for students and scholars in various fields of the social sciences and humanities. While it does not develop the contours of a positive global normative order, it certainly succeeds in unveiling the complexities of globally articulated relations of difference. Only a handful of books in IR show a similar degree of innovation and rigorousness!" (Prof. Dr. Dirk Nabers, University of Kiel (Germany))

"'Political Difference and Global Normative Orders' provides an excellent discussion of the current scholarship on the question of order and difference. The author, by resorting to the post-foundational approach of hauntology, makes a valuable contribution to the study of order in IR and beyond." (Dr. David Shim, University of Groningen (The Netherlands))