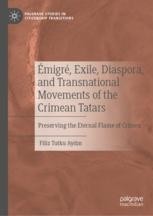 Émigré, Exile, Diaspora, and Transnational Movements of the Crimean Tatars

Preserving the Eternal Flame of Crimea

This book explains the unexpected mobilization of the Crimean Tatar diaspora in recent decades through an exploration of the exile experiences of the Crimean Tatars in Central Asia, Middle East, Eastern Europe, and North America. This book adds to the growing literature on diaspora case studies and is essential reading for researchers and students of diasporas, migration, ethnicity, nationalism, transnationalism, identity formation and social movements. Moreover, this book is relevant both for specialists in Crimean Tatar Studies and for the larger fields of Communist, Post-Communist, Middle Eastern, European, and American studies.

Filiz Tutku Aydın is Assistant Professor in the Department of Political Science and Public Administration at the Social Sciences University of Ankara, Turkey.

“Filiz Tutku Aydın is steeped in the history, language, and culture of Crimean Tatars and their tragic history of dispersal. She is especially informative about the fate of Tatars under Stalin’s regime. Using careful exegesis of the comparative literature and rich descriptions of Tatars abroad, the author graphically shows how their diaspora was mobilized despite their poignant history of exile and deportation.” (—Robin Cohen, Professor Emeritus of Development Studies, University of Oxford, UK)

“In 2014, Crimea was catapulted into the worldwide media following its forcible annexation by Russia. The Crimean Tatars, who were deported en masse in 1944 and who managed to return home in the 1990s, were threatened once again with deportation. Filiz Tutku Aydin’s book tells the remarkable story of how in the course of the twentieth century the Crimean Tatars managed to survive the tribulations of exile in foreign lands and how some managed against incredible odds to return home. Aydin’s book is truly unique in that it tells us not only about Crimean Tatar exiles in Soviet Central Asia, but also about the little-known experience of diasporan communities in Romania, Turkey, and the United States.  The well-documented study is a must-read for anyone interested in transnationalism and the impact of diasporan communities upon their ancestral homelands.” (—Paul Robert Magocsi, University of Toronto, Canada)

“Crimean Tatars, the native people of the Crimea, have experienced bitter debacles of history, starting with the loss of their centuries-long statehood to the Russian Empire in 1783. While the majority of its population were forced to emigrate to the Ottoman Empire in the course of the following 150 years, the remaining ones were subjected to genocidal mass deportation to Central Asia by Stalin in 1944. Consequently, the modern history of the Crimean Tatars has become one of an incessant struggle for national survival and reclaiming their homeland against all odds up to this very day. The extremely unfavorable historical circumstances have compelled the Crimean Tatar people to unite its dispersed diasporic components by constructing a “transnational nation,” a peculiar and remarkably successful case of its kind among the peoples of the ex-USSR. Filiz Tutku Aydın treats this complex subject with the deep insight of an insider and a sound analysis of a scholar. This book is not only an essential reading material to learn the diasporic history of the Crimean Tatars, but also provides us with a useful and comparative case study for the experiences of similar transnational peoples and their long-distance national existence.” (—Hakan Kırımlı, Bilkent University, Ankara, Turkey)

“This is a fascinating study of Crimean Tatars as a transnational nation. Putting framing processes at the center of her analysis, Filiz Tutku Aydin develops a comparative typology of long-distance nationalism and offers intriguing insights into the long-term developments of diasporic mobilization.” (—Martin Sokefeld, Martin Sökefeld, Luwig Maximilan University of Munich, Germany)