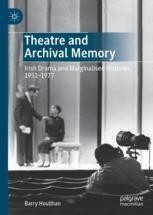 This book presents new insights into the production and reception of Irish drama, its internationalisation and political influences, within a pivotal period of Irish cultural and social change. From the 1950s onwards, Irish theatre engaged audiences within new theatrical forms at venues from the Pike Theatre, the Project Arts Centre, and the Gate Theatre, as well as at Ireland’s national theatre, the Abbey.

Drawing on newly released and digitised archival records, this book argues for an inclusive historiography reflective of the formative impacts upon modern Irish theatre as recorded within marginalised performance histories. This study examines these works' experimental dramaturgical impacts in terms of production, reception, and archival legacies. The book, framed by the device of ‘archival memory’, serves as a means for scholars and theatre-makers to inter-contextualise existing historiography and to challenge canon formation. It also presents a new social history of Irish theatre told from the fringes of history and reanimated through archival memory.

Dr. Barry Houlihan is an Archivist at National University of Ireland, Galway. He teaches theatre history and archival studies, digital cultures, and history. Barry is the editor of Navigating Ireland’s Theatre Archive: Theory, Practice, Performance (2019) and contributes regularly to RTÉ Brainstorm on topics of theatre, literature and cultural and archival heritage.

"Breathtaking in its precision and originality, Barry Houlihan's monograph offers a dynamic engagement with the archive which expands the canon of Modern Irish Drama as we know it. This study offers a living-history which moves beyond textual analysis to release the sensory power of live performances, events and places. Productions and key figures are brought to glorious life through Houlihan's unrivalled range of source materials, interviews, artefacts and ephemera which illuminate previously unknown histories of gender, class and social conditions in Twentieth Century Irish Theatre."

“This timely book is an invigorating call to (re)witness Irish theatre history; Theatre and Archival Memory; Irish Drama and Marginalised Histories 1951-1977 compellingly articulates a history of theatre-going in modernising Ireland, thus creating a revelatory portrait of a State and theatre in transition. Houlihan’s thoughtful and forensic scholarship into the material and archival history of Irish theatre and society uncovers a trove of neglected plays and playwrights. This book challenges outdated views on the history of Irish theatre by expanding and enriching our understanding of the artists, institutions and societal forces that shaped Irish theatre practice. An invaluable and illuminating resource for all scholars, historians and practitioners of Irish theatre.”

“Barry Houlihan’s Theatre and Archival Memory analyses a pivotal but under-explored period in Irish theatre history – showing us an Ireland that was beginning to embrace globalization, liberalism and industrialisation, but which was also inexorably heading towards the tragedy of the Troubles. This book explains how the Irish theatre both encouraged and analysed those societal changes, focussing on major dramatists from Brendan Behan to Brian Friel to Edna O’Brien, as well as writers who have been unjustly neglected. It also dedicates much-needed attention to Ireland’s other theatre-makers: its directors and actors, its designers and producers, and perhaps most importantly its audiences. Using a staggering array of archival sources – many of which have never before been written about –  this book will have a transformative impact on Irish theatre history and historiography.”