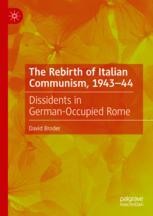 During the final years of the Second World War, a decisive change took place in the Italian left, as the Italian Communist Party (PCI) rose from clandestinity and recast itself as a mass, patriotic force committed to building a new democracy. This book explains how this new party came into being. Using Rome as its focus, it explains that the rebirth of the PCI required that it subdue other, dissident strands of communist thinking. During the nine-month German occupation of Rome in 1943-44, dissident communists would create the capital’s largest single resistance formation, the Communist Movement of Italy (MCd’I), which galvanised a social revolt in the capital's borgate slums.

Exploring this wartime battle to define the rebirth of Italian communism, the author examines the ways in which a militant minority of communists rooted their activity in the everyday lives of the population under occupation. In particular, this study focuses on the role of draft resistance and the revolt against labour conscription in driving recruitment to partisan bands, and how communist militants sought to mould these recruits through an active effort of political education. Studying the political writing of these dissidents, their autodidact Marxism and the social conditions in which it emerged, this book also sheds light on an often-ignored underground culture in the years that preceded the armed resistance that began in September 1943. Revealing an almost unknown history of dissident communism in Italy, outside of more recognisable traditions like Trotskyism or Bordigism, this book provides an innovative perspective on Italian history. It will be of interest to those researching the broad topics of political and social history, but more specifically, resistance in the Second World War and the post-war European left.

David Broder is a historian of French and Italian communism, having studied for his PhD at the London School of Economics, UK. He is the Europe Editor of Jacobin, an American quarterly socialist magazine offering perspectives on politics, economics and culture.