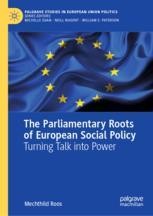 The European Parliament (EP) – a powerful actor in today's European Union – was not intended to be more than a consultative assembly at first. Yet this book shows that the EP was much more influential in shaping Community policy in the early years of the integration process than either the founding Treaties or most existing scholarship would allow. It studies the EP’s institutional evolution through the lens of Community social policy, a policy area with a particularly strong ideational dimension. By promoting a European social dimension, Members of the EP (MEPs) presented the Parliament as the true representative of European citizens by channelling their interests and needs. MEPs thus emphasised the EP’s role as a provider of democratic legitimacy for Community politics, whilst at the same time trying to convince European citizens that the Communities could have a real and positive impact on their everyday lives.

"There are two preconceived notions about the European Parliament in its early decades of existence: There is no good reason to care about the Parliament before it was granted ‘real’ powers in the late 1980s. And no one should obviously expect a weak Parliament to have any effective say over a policy where Community prerogatives are already weak, as is the case in social policy. Mechthild Roos’ remarkable book challenges these two notions and demonstrates how a perfect marriage between political science and contemporary history looks like: She shows with analytical clarity and supported by empirically rich case studies that the young Parliament developed many of the institutional norms and practices that influenced its future trajectory. Fascinating are the accounts of how a small, self-selected group of personalities, at times, succeeded in socializing its peers to become daring and politically successful pro-European activists. A must read for any EU politics and integration buff.“

“The institutional development and political influence of the European Parliament has been a core staple of EU research, but until now the focus has been almost exclusively on the period after direct elections in 1979. With this meticulously researched book Roos employs the tools of both historical analysis and political science to demonstrate not only the substantive policy influence of the EP in the realm of social policy during these early years, but also the important role played by MEPs themselves in pushing for increased institutional power and European integration. By providing us with new insights into the internal organization, broad political goals and tangible policy influence of the early European Parliament Roos provides significant new insights into the origins of the eventual formalization of EP powers in the decades after direct elections. This book is an important, and long overdue, contribution to the study of the European Parliament and the institutional evolution of the European Union more generally.”