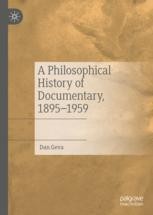 This book presents a chronology of thirty definitions attributed to the word, term, phrase, and concept of “documentary” between the years 1895 and 1959. The book dedicates one chapter to each of the thirty definitions, scrutinizing their idiosyncratic language games from close range while focusing on their historical roots and concealed philosophical sources of inspiration. Dan Geva's principal argument is twofold: first, that each definition is an original ethical premise of documentary; and second, that only the structured assemblage of the entire set of definitions successfully depicts the true ethical nature of documentary insofar as we agree to consider its philosophical history as a reflective object of thought in a perpetual state of being-self-defined: an ethics sui generis.

Dan Geva is an associate professor at Beit-Berl College, a research fellow at the University of Haifa, an award-winning documentarian, and founder of “The Ethics Lab” (CILECT, 2017). He is the author of Toward a Philosophy of the Documentarian; A Prolegomenon (Palgrave Macmillan, 2018) and The Ethics Lab Guidebook CILECT, 2019).

"In response to numerous assertions by filmmakers and scholars that documentary is past or beyond definition—as if it functioned as an aesthetic strait-jacket—Dan Geva offers an emphatic and compelling NO!  Rather, he asserts that the issue of definition consistently hovers over both scholarship and production of documentary.  In this volume, Geva opens up, through lucid philosophical investigations of filmmakers’ writings and films, the definitions that emerge in their work.  By attending to both their cultural and historical particularity as well as their function as a single transhistorical enunciation, Geva speaks to the extraordinary range of practices and thought that existed between 1985-1959 while maintaining that there is such a thing as 'documentariness.'"
Joshua Malitsky, Associate Professor, Cinema and Media Studies/The Media School and Director, Indiana University Center for Documentary Research and Practice, Indiana University, USA

"In an age when the concepts of 'fact' and 'science' have become focal points of political controversy, Dan Geva’s meticulous historical exploration of the ethical implications of the very idea of 'documentary' film are especially useful for documentarians, film historians and media theoreticians alike."

"This book offers a prismatic re-examination of the non-fiction form using philosophy in unexpected ways to lay open the complex struggles at the core of documentary filmmaking's ethical project—a place where each practitioner engages anew with the deepest questions about the self and its ethical relationship with the world. This book is not a documentary history, but rather a vision of how the perpetual re-conceptualization of documentary—far from being a weakness of a cinematic sub-genre—is central the quest that keeps documentary practice alive."