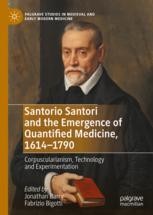 Santorio Santori and the Emergence of Quantified Medicine, 1614-1790

This book examines the life and works of Santorio Santori and his impact on the history of medicine and natural philosophy. Reputed as the father of experimental medicine and procedures, he is also known for his invention of numerous scientific instruments, including early precision medical devices (pulsimeters, hygrometers, thermometers, anemometers), as well as clinical and surgical tools. The chapters in this volume explore Santorio’s legacy through the seventeenth and eighteenth centuries. They highlight the role played by medical practitioners such as Santorio in the development of corpuscularian ideas, central to the ‘new science’ of the period, and place new emphasis on the role of the life sciences, chemistry and medicine in encouraging new forms of experimentation and instrument-making.

Jonathan Barry is an Emeritus Professor of History at the University of Exeter, UK, and Guest Professor at LMU in Munich, Germany. He is an early modern social and cultural historian with a particular interest in the history of science, medicine and witchcraft, and co-editor of Palgrave Historical Studies in Witchcraft and Magic. He was co-founder of the Centre for Medical History at Exeter and a Wellcome Senior Investigator in Medical Humanities (2012-18) for a project on medical practice in England, Ireland and Wales 1500-1715.

Fabrizio Bigotti is an intellectual historian with a specialisation in the history of science, medicine, and technology in the late medieval and early modern period (1300-1700). His publications include works on late-Renaissance Galenism, Santorio Santori, early modern corpuscularianism and precision instruments. His work focuses particularly on the history of quantification, being more broadly concerned with the role that classical and medieval philosophies played in the development of early modern logic, theory of matter, anatomy, and physiology. He is the founding director of the Centre for the Study of Medicine and the Body in the Renaissance (CSMBR) and Research Fellow at the Institute for the History of Medicine at the Julius Maximilian University of Würzburg in Germany. Since 2018, he is also honorary research fellow at the College of Humanities of the University of Exeter, UK.