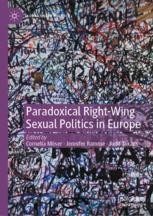 How did far-right, hateful and anti-democratic ideologies become so successful in many societies in Europe? This volume analyses the paradoxical roles sexual politics have played in this process and reveals that the incoherence and untruthfulness in right-wing populist, ultraconservative and far-right rhetorics of fear are not necessarily signs of weakness. Instead, the authors show how the far right can profit from its own incoherence by generating fear and creating discourses of crisis for which they are ready to offer simple solutions. In studies on Poland, Hungary, Spain, Italy, Austria, Ireland, Northern Ireland, Portugal, France, Sweden and Russia, the ways far-right ideologies travel and take root are analysed from a multi-disciplinary perspective, including feminist and LGBTQI reactions. Understanding how hateful and antidemocratic ideologies enter the very centre of European societies is a necessary premise for developing successful counterstrategies.

Cornelia Möser is a Researcher at the French National Centre for Scientific Research (CNRS), France, working on feminist, queer and gender studies in France, Germany and the USA. She publishes on feminist theory and translation as well as on queer/feminist criticism of the state as well as genealogies of materialist feminisms.

Jennifer Ramme is a Researcher and Lecturer at the European University Viadrina, Collegium Polonicum, and member of the Viadrina Institute for European Studies, Germany. She has widely published on right wing sexual and gender politics, familism and familist nationalism, LGBTQ* and feminist movements and protest in Poland.

Judit Takács is a Research Professor at the Centre for Social Sciences, Hungarian Academy of Sciences Centre of Excellence, Hungary. Currently she is an Academy in Exile Fellow at the Kulturwissenschaftliches Institut (KWI) in Essen, Germany.

“Sex, lies, fear, conspiracy, crisis! The rhetoric of the new far-right politics echoes across Europe, and beyond. This nuanced and important book shows how repressive sexual politics, attacking the rights of women, gay men, and trans groups, is a key theme of authoritarian movements from Portugal to Russia. Mixed in different ways with racism, nationalism and religion, this sexual politics fuels a major threat to democracy and civil society. “

“This collection is a fresh and bold challenge to dominant analyses of current European right wing sexual politics and its ‘brutalization.’ The essays are conceptual, empirical, and comparative, of ten countries, including two rarely discussed on the topic. The arguments reveal the paradoxes and diverse ideological bases of right wing sexual politics. They convincingly deploy critical theory, reject monocausal explanations, whether in terms of neoliberalism or religion, reject a dichotomization of the economic and the cultural, and accounts of trans politics and queer feminism as simple ‘identity‘ politics. The collection definitely advances the current discussion.”

“This empirically rich comparative study of how far-right agendas are becoming increasingly normalized and mainstream in Europe is a valuable contribution to the growing body of evidence that exclusionary and uncompromisingly heteronormative right-wing sexual politics are becoming our 'brutal normalities.’ Paradoxical Right-Wing Sexual Politics in Europe is both a continuation of research on the radicalisation of politics in the post-truth times of fake news and populism, and an attempt to overcome the shortcomings of previous studies, particularly in highlighting the crisis of masculinity as one of the key building blocks of the current 'brutalisation of politics.’ As such, it is a much-needed call to action—both on a personal and institutional level.”

—Roman Kuhar, Professor of Sociology at the Faculty of Arts, University of Ljubljana, Slovenia, and co-editor (with D. Paternotte) of Anti-Gender Campaigns in Europe (2017)