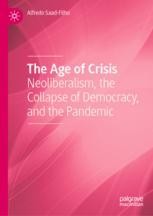 The Age of Crisis

Neoliberalism, the Collapse of Democracy, and the Pandemic

This book offers an analysis of the causes, development, and likely consequences of the Covid-19 pandemic for global neoliberalism. The analysis will draw upon the author’s previous work on neoliberalism, and on its twin crises: the economic crisis (the Global Financial Crisis (GFC), ongoing since 2007) and, subsequently, the crisis of political democracy that has been associated with the rise of ‘spectacular’ authoritarian leaders in several countries. The approach is grounded on Marxist political economy.

The book argues that the Covid-19 pandemic emerges out of this context of deep inequalities and crises in the economy and in politics, and it is likely to reinforce the exclusionary tendencies of neoliberalism, with detrimental implications both for economic prosperity and for democracy. In turn, the pandemic has revealed the limitations of neoliberalism like never before, with implications for the legitimacy of capitalism itself, and opening unprecedented spaces for the left.

This book will be of interest to academics in economics, international relations, political science, political economy, sociology and development studies.

"​Clearly written, highly engaging and very topical, this is an excellent read that convincingly shows the links between neoliberalism and the damage it has done to public life." (--Ray Kiely, Professor of International Politics, Queen Mary University of London, UK.)

"A convincing argument that the neoliberal age is necessarily one of periodic, overlapping crises: in economies, in politics, in health. But these crises will not force change in themselves: that requires sustained, overwhelming public pressure." (--Jayati Ghosh, Professor of Economics at the University of Massachusetts at Amherst, USA.)

"This is the leading account of the economics, politics and ideology of the Covid-pandemic, emphasising its grounding in an increasingly authoritarian neoliberalism. It forms the starting point for all such political economies." (--Ben Fine, Emeritus Professor of Economics, SOAS University of London, UK.)

"Alfredo Saad-Filho skilfully and lucidly reveals how the COVID-19 pandemic has emerged in a world already strained with contradictions. The Age off Crisis is a must-read for anyone interested in understanding the capitalist origins and neoliberal framings of the COVID-19 pandemic and its aftermath, marked by growing levels of authoritarianism, inequalities and violence." (--Susanne Soederberg, Professor of Global Development Studies at Queen’s University, Canada)

"Over the last decades, students, researchers and activists alike have turned to Alfredo Saad-Filho for his penetrating insights into the policy regime of neoliberalism. He now casts his critical eye on the practices of neoliberalism in the moment of pandemics, unprecedented forms of economic policy, and multiplying forms of authoritarian politics. Global neoliberalism has formed a series of paradoxes of wealth besides deteriorating employment, democratic representation without state capacity to pursue mandates, and authoritarian leaders seeking stability but generating political polarization. If there is a book to read on what the post-pandemic political-economic context might look like, and the need to pursue political alternatives to existing politics, this is the one." (--Greg Albo, Professor of Political Economy, York University, Toronto, Canada)

Book Title
The Age of Crisis
Book Subtitle
Neoliberalism, the Collapse of Democracy, and the Pandemic
Authors
Copyright
2021
Publisher
Palgrave Macmillan
Copyright Holder
The Editor(s) (if applicable) and The Author(s), under exclusive license to Springer Nature Switzerland AG