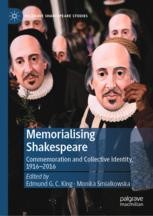 This book is the first comprehensive account of global Shakespeare commemoration in the period between 1916 and 2016. Combining historical analysis with insights into current practice, Memorialising Shakespeare covers Shakespeare commemoration in China, Ukraine, Egypt, and France, as well as Great Britain and the United States. Chapter authors discuss a broad range of commemorative activities—from pageants, dance, dramatic performances, and sculpture, to conferences, exhibitions, and more private acts of engagement, such as reading and diary writing. Themes covered include Shakespeare’s role in the formation of cultural memory and national and global identities, as well as Shakespeare’s relationship to decolonisation and race. A significant feature of the book is the inclusion of chapters from organisers of recent Shakespeare commemoration events, reflecting on their own practice. Together, the chapters in Memorialising Shakespeare show what has been at stake when communities, identity groups, and institutions have come together to commemorate Shakespeare.

Edmund G. C. King is a Lecturer in English at The Open University in Milton Keynes, UK. A book historian with a speciality in the history of reading, his published work has appeared in Book History (2013), Shakespeare (2014), the Yearbook of English Studies (2015), and The Cambridge Companion to Shakespeare’s First Folio (2016).

Monika Smialkowska is a Senior Lecturer in English Literature at Northumbria University, UK. Her current research interests lie in post-renaissance adaptations and appropriations of Shakespeare. Her published work has appeared in Critical Survey (2010), Shakespeare (2011, 2014), The Cambridge Guide to the Worlds of Shakespeare, Volume Two: The World’s Shakespeare, 1660-Present (2016), and Shakespeare in the North: Place, Politics and Performance in England and Scotland (2021).

This extraordinary collection introduces us to commemorations of Shakespeare in locations and contexts we would never have expected.  It shows how he has been deployed as ambassador, warrior, inspiration and ‘cultural saint’ to boost and create the self-image not only of the British but of other nations too.

Designed to offer ‘an analytic audit of the field’ in the wake of the 2016 Shakespeare quatercentenary commemorations, Memorialising Shakespeare does considerably more than that. It reaches back to ideologically-charged tercentenary ceremonies in British-occupied Egypt in 1916 and to representations of “the Shakespeare-reading soldier” in the Great War before beating a path to more recent commemorative events staged in the Soviet Union in 1964, France in 2014, China in 2016, and myriad other points in between.  Concluding with a stunning Afterword by Ton Honselaars that movingly dips back into the trenches of 1916, the book offers deeply informed state-of-the-art assessments of Shakespeare’s locations in the here and now of the last one hundred years that will undoubtedly serve as a template for future efforts in kind.