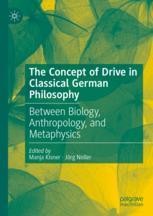 The Concept of Drive in Classical German Philosophy

Between Biology, Anthropology, and Metaphysics

This volume gathers a collection of fourteen original articles discussing the concept of drive in classical German philosophy. Its aim is to offer a comprehensive historical overview of the concept of drive at the turn of the 19th century and to discuss it both historically and systematically. From the 18th century onward, the concept of drive started to play an important role in emerging disciplines such as biology, anthropology, and psychology. In these fields, the concept of drive was used to describe the inner forces of organic nature, or, more particularly, human urges and desires. But it was in the period of classical German philosophy that this concept developed into an important philosophical concept crucial to Kant’s and post-Kantian idealistic systems. Reflecting the complexity of this concept, the volume first discusses historical sources of drive theories in Leibniz, Reimarus, and Blumenbach. Afterwards, the volume presents the philosophical accounts of drives in Kant, Fichte, Schelling, and Hegel, and also gives a systematic overview of other important drive theories that were formed around 1800 by Herder, Goethe, Jacobi, Novalis, Reinhold, Schiller, and Schopenhauer.

Manja Kisner is Lecturer in Philosophy at the University of Wuppertal. She completed her PhD and postdoc studies at the University of Munich. She has written articles and book chapters on Kant, Fichte, Schelling, and Schopenhauer. Her books include Der Wille und das Ding an sich (2016) and The Concept of Will in Classical German Philosophy (with J. Noller, 2020).

Jörg Noller is Lecturer in Philosophy at the University of Munich. He is the author of a number of books, editions and articles on freedom from a historical and systematic perspective, including Die Bestimmung des Willens (2016) and Kant’s Early Critics on Freedom of the Will (with J. Walsh, 2021). His research interests include metaphysics, freedom, personhood, and German Idealism.