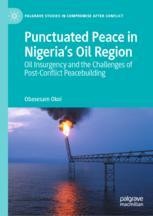 Oil Insurgency and the Challenges of Post-Conflict Peacebuilding

This book examines the extent to which peacebuilding processes such as disarmament, demobilization, and reintegration are possible in the attempt to demilitarize Nigeria’s oil region and establish a stable post-conflict environment for nurturing durable peace. The book argues that the failure of the peacebuilders to address the structural tensions at the heart of insurgency, along with competition for access to the material benefits of peacebuilding, have revived violence at repeated intervals that punctuates the progression of peace. The author’s analysis shows how the interventions pursued by peacebuilders have been successful in stabilizing the oil region by taking arms from insurgents, paying them monthly allowances, and building their capacity to reintegrate into society through a range of transformational processes. While these interventions are praiseworthy, they have transformed the political realities of peacebuilding into an economic enterprise that makes recourse to violence a lucrative endeavour as identity groups frequently mobilize insurgency targeting oil infrastructure to compel the state to enter into negotiations with them. There was little consideration for the impact corruption might have on the peacebuilding process. As corruption becomes entrenched, it fosters exclusion and anger, leading to further conflict. The book proposes pathways to positive peacebuilding in Nigeria’s oil region.

Obasesam Okoi is Assistant Professor of Justice and Peace Studies at the University of St Thomas, USA.

“The insurgency that erupted across the oilfields of the Nigeria Delta in late 2005 culminated in a government sponsored amnesty in 2009 in which over 30,000 militants and their commanders participated. Obasesam Okoi’s important book shows that unless the structural conditions that generated violence in the first place are directly confronted and addressed, peacebuilding will be fragile and incomplete—what he calls punctuated—and will be marked by periodic turbulence and regression. Punctuated Peace in Nigeria’s Oil Region is an important contribution to our understanding of the dynamics of political violence and to the pathways capable of leading to sustainable peace.”(— Michael Watts, Class of 63 Professor Emeritus, University of California, Berkeley, USA.)

“This is a thought-provoking study exploring how disarmament, demobilization, and reintegration are possible in efforts to forge a stable peacebuilding milieu while demilitarizing Nigeria’s oil region. Obasesam Okoi blends empiricism, practice, and theory to explore the tensions and nexus between government and local activists working to stimulate a fragile peace in the oil region. This well researched and fascinating book will inform policymakers, students, and scholars with the reality of engaging local stakeholders in a process of social justice and peacebuilding.” (— Sean Byrne, Professor of Peace and Conflict Studies, University of Manitoba, Canada.)

“In this insightful book, Obasesam Okoi reflects on his experience working with former insurgents to gain a nuanced understanding of the success and failure of the peacebuilding program designed to address Nigeria’s oil insurgency. Drawing from his fieldwork in the Niger Delta, he shows persuasively how the lofty ambitions of the peacebuilders have resulted in temporary success, punctuated by the revival of insurgency at repeated intervals due to structural factors. This book points to a more comprehensive study of the needs and aspirations of the ex-insurgents, which are reflected in the pathways to positive peacebuilding in the oil region.” (—Uwafiokun Idemudia, Professor of Development Studies, York University, Canada.)