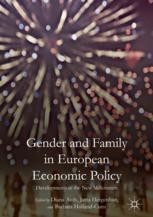 Developments in the New Millennium

This collection explores how pioneering gender equality policies have shaped women's economic presence in Europe since 2000. Equal pay policies, parental leave reforms, corporate quotas and electoral quotas have raised pressing questions about the effectiveness in promoting equal participation, as researchers quote both quantitative improvement in gender diversity and qualitative lag in cultural change. The chapters in this book present interlocking cross-national and cross-policy comparisons of the three most controversial reforms: equal pay, parental leave, and quotas for political representatives. The contributors address the cultural context in which reforms arose, internally contradictory policies, and the relative effectiveness of fast-track quotas and incentives compared to long-term efforts to change the overall culture of gender. This critical examination of the new millennium's groundbreaking gender policies will appeal to academics and practitioners interested in the progress of gender equality in the economic, political, and social welfare fields.

“This collection of essays offers a timely account of a range of gender- and family- related policies in a number of EU Member States. … Across the various chapters there is a great depth of information, and the book provides some very interesting insights into the case studies presented. One key theme that emerges across all chapters, is the role of culture in achieving or hampering the movement towards gender equality.” (Muireann O’Dwyer, Journal of Common Market Studies JCMS, Vol. 56 (2), March, 2018)