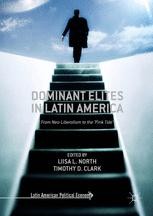 From Neo-Liberalism to the ‘Pink Tide’

This volume examines the ways in which the socio-economic elites of the region have transformed and expanded the material bases of their power from the inception of neo-liberal policies in the 1970s through to the so-called progressive ‘pink tide’ governments of the past two decades. The six case study chapters—on Chile, Brazil, Ecuador, Colombia, El Salvador, and Guatemala—variously explore how state policies and even United Nations peace-keeping missions have enhanced elite control of land and agricultural exports, banks and insurance companies, wholesale and import commerce, industrial activities, and alliances with foreign capital. Chapters also pay attention to the ways in which violence has been deployed to maintain elite power, and how international forces feed into sustaining historic and contemporary configurations of power.

“The message of this volume, compiled by some of the foremost authorities on political economy in Latin America, should resonate among North Americans as well. As in the United States - and with the complicity of US governments and international financial institutions - traditional and new oligarchies in Latin America take advantage of market expansion generated by years of progressive leadership to reconstitute their own political and economic hegemony across larger regional domains. The privatization associated with re-conquest is not only of means of production. The first thing the smartest of thieves will steal is the government itself.” (Jan Knippers Black, Professor of Human Rights, International and Comparative Politics of the Western Hemisphere, Women's Rights, and Globalization, Middlebury Institute of International Studies, Monterey, California)

“Latin America’s ruling elites are back—or rather they never left the stage in the first place. In this outstanding new collection, the authors reveal that, despite some social progress in the new millennium, Latin American remains as unequal as ever. And its elites, far from having taken a back seat in the post-neoliberal era, have reconfigured their domination in new ways. With commodity prices declining, public spending falling, and unemployment rising, the urgency and importance of North and Clark’s new book cannot be exaggerated. It is bold and authoritative, grounded in rich empirical and historical case studies, and bound to have a major impact on a new generation of scholars, students, and activists seeking to understand the persistence of violence and injustice in the new Latin America.” (Gavin Fridell, Canada Research Chair in International Development Studies, Saint Mary’s University, Canada)

“Dominant Classes in Latin America: From Neo-Liberalism to the Pink Tide” provides interesting analysis of new strategies of elite dominance, explores new and on-going forms of dispossession, and outlines heightened inequality despite more than two decades of ‘democratic’ politics throughout Latin America.  With detailed and carefully argued chapters on six countries, this is an important, readable, and superbly useful collection.” (Jim Handy, Professor of History, University of Saskatchewan, Canada)