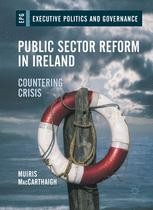 This book provides a thematic case-study analysis of the wide-ranging public sector reforms introduced in one of the states most deeply affected by the global financial crisis: the Republic of Ireland. It presents a timely and apposite examination of how a crisis can be used to overcome barriers and facilitate new reform agendas. The study draws upon unique insider access to the centre of Irish government, as well as interviews with over 60 key figures, to examine the implementation of those reforms over the 2011-16 period. The book opens with a contextual analysis of the creation of the Department of Public Expenditure and Reform. Subsequent chapters explore the process of shrinking the Irish state, renegotiating the political-administrative bargain, expenditure reforms, administrative culture reforms, and political reforms. This rich ‘in action’ study of a reform agenda undertaken during a period of crisis will appeal not only to students of executive politics, cutback management and public sector reform, but also to practitioners seeking to implement administrative reforms.

“This book contributes much to the academic analysis of state retrenchment. In fact, it also contributes much to studies of government growth – not in terms of spending but in terms of bureaucratic size. … Public Sector Reform in Ireland documents and analyses the complexities of whole-of-government reform to counter the financial crisis using the single case study of Ireland.” (Yao Han, LSE Review of Books, blogs.lse.ac.uk, June, 2018)

“This is a book which needed to be written and Muiris MacCarthaigh has done us a great service by describing and analysing, in great depth, the public sector reforms which were initiated in the period 2011–2016 … . I have no hesitation in recommending this book. It is a tremendous contribution to the existing literature in this field and I know that I will be using it extensively in the classroom.” (Aodh Quinlivan, Irish Political Studies, February, 2018)
“This well-crafted book offers a ‘thick’ description of how the Irish state manufactured and delivered its administrative reforms after the 2008 financial crisis. It provides an invaluable exploration of how domestic and international influences shaped new thinking on issues such as shrinking the state, reforming public service employment, cutting expenditure, developing performance reforms and transparency initiatives.” (Philippe Bezes, Centre for European Studies, Science Po, France)

“This masterly and insightful analysis addresses the policy choices faced by the Irish government as it sought to undertake substantial public administration reforms in the midst of the global financial crisis. Both practitioners and scholars will benefit from reading this account of reform in action - not only in Ireland but also on a global scale.” (Tiina Randma-Liiv, Tallinn University of Technology, Estonia, and Walter Kickert,  Erasmus University Rotterdam, the Netherlands)