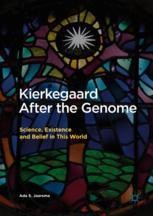 Kierkegaard After the Genome

Science, Existence and Belief in This World

This book brings Søren Kierkegaard’s nineteenth-century existentialist project into our contemporary age, applying his understanding of “freedom” and “despair” to science and science studies, queer, decolonial and critical race theory, and disability studies. The book draws out the materialist dimensions of belief, examining the existential dynamics of phenomena like placebos, epigenetics, pedagogy, and scientific inquiry itself. Each chapter dramatizes the ways in which abstractions like “race” or “genes” and even “belief” are sites of contested practices with pressing political significance. Focusing on the existential dangers posed by neo-liberal and finance capitalist systems, the book brings to life the resources for resistance found within science studies and critical approaches to race, secularity, and disability. Throughout the book, Kierkegaard becomes an ally with ecological and developmental evolutionary theorists, as well as with science studies, critical race, and crip theorists who foreground the relational and impassioned nature of existence.

Ada S. Jaarsma is associate professor of philosophy at Mount Royal University. Her articles have appeared in Gender and Education, Studies in Philosophy and Education, European Legacy, Constellations, Journal for Cultural and Religious Theory, and Hypatia.

“A remarkable resource not only for Kierkegaard scholars but for anyone interested in the relationship between philosophy, religion, and science as lived practices, this book opens up new spaces for research and articulates a promising way of living as reflectively engaged, fully invested, and socially located. Summing Up: Recommended. Upper-division undergraduates and above.” (J. A. Simmons, Choice, Vol. 55 (8), April, 2018)
“Jaarsma has written an extraordinary book that completely rejuvenates Kierkegaard’s thought for the twenty-first century. What happens to belief, she asks, when it becomes synonymous with a placebo effect? Or to religious belief, when it becomes belief in this world? What if the Human Genome project is a Neo-Darwinist theodicy, where both the design and malevolence of the world find their ratification, not in divine omniscience, but in genomic scripts? What if Kierkegaard were a process philosopher like Whitehead, or a sociologist of science like Latour, or a race theorist like Fanon, or an existential theorist in disability studies? Jaarsma poses these questions—and many others—with the dexterity of a rigorous philosopher and astute cultural observer, and she writes in a style that is at once personal and erudite. Kierkegaard after the Genome is an essential work that will both revitalize Kierkegaard studies and has the potential to transform its readers’ relations to their lives and to their existential worlds.” (Daniel W. Smith, Professor of Philosophy, Purdue University, USA)

“In this startlingly original book, Ada Jaarsma shows why science studies needs to get existential, and why feminist, queer, decolonial, and disability theorists need to engage with science studies (and vice versa). While critiquing secularizing narratives of development, Jaarsma draws on post-genomic science studies to develop a non-teleological, relational, and materialist approach that attends to the stories told by bodies-in-becoming as well as those captured by indifference or despair. Her distinctively anti-individualist Kierkegaard is an ally in resisting the deadening forces of colonialism and capitalism, and seeking out spiritually lively modes of existence that foster divergent perspectives and amplify possibilities for becoming.” (Rachel Jones, Associate Professor in Philosophy, George Mason University, USA)

Book Title
Kierkegaard After the Genome
Book Subtitle
Science, Existence and Belief in This World
Authors
Copyright
2017
Publisher
Palgrave Macmillan
Copyright Holder
The Editor(s) (if applicable) and The Author(s)