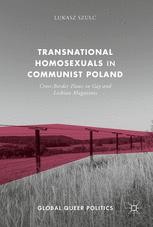 This book traces the fascinating history of the first Polish gay and lesbian magazines to explore the globalization of LGBT identities and politics in Central and Eastern Europe during the twilight years of the Cold War. It details the emergence of homosexual movement and charts cross-border flows of cultural products, identity paradigms and activism models in communist Poland. The work demonstrates that Polish homosexual activists were not locked behind the Iron Curtain, but actively participated in the transnational construction of homosexuality. Their magazines were largely influenced by Western magazines: used similar words, discussed similar topics or simply translated Western texts and reproduced Western images. However, the imported ideas were not just copied but selectively adopted as well as strategically and creatively adapted in the Polish magazines so their authors could construct their own unique identities and build their own original politics.

Lukasz Szulc is Marie Curie Individual Fellow in the Media and Communications Department of the London School of Economics and Political Science, UK. He has published articles in journals such as Sexualities and contributed chapters to books such as Queer in Europe: Contemporary Case Studies (2011). He is co-editor of the book LGBTQs, Media and Culture in Europe (2017).

“Through his meticulous and wide-ranging research, lucid prose, and engaging style, Lukasz Szulc pulls back the (pink) Iron Curtain, accompanying readers on a journey through a long hidden and usually inaccessible place in our shared past.” (David Weiss, QED A Journal in GLBTQ Worldmaking, Vol. 7 (2), 2020)

“Lukasz Szulc’s monograph is the opening volume of a new book series called Global Queer Politics. … Szulc’s book primarily seems to address readers and scholars who are active in the globalizing field of LGBTQ studies … . Its particular appeal for Polonists and Slavists, in turn, lies in the author’s careful and well-documented analysis of the homosexuality-related adaptive and adoptive attitudes and strategies as proposed by the two Polish magazines under discussion.” (Kris Van Heuckelom, The Polish Review, Vol. 64 (2), 2019)

“The book is more likely to be of interest to LGBT and media scholars than to magazine teachers and researchers, but I can imagine it serving as the catalyst for some fascinating dissertations and published research on pre-1989 zines in Central and Eastern Europe. … the book could serve to fill gaps in knowledge about a life that some of us may have experienced personally but understood only incompletely and one-sidedly.” (Miglena Sternadori, Journal of Magazine Media, Vol. 19 (1), 2019)

“Szulc mentions the broader context of east central Europe, yet focuses mainly on Poland. This is understandable, a comparative project would require a group of scholars with different linguistic abilities; … . The most original and elsewhere unavailable parts of the book are analyses of the east European Information Pool reports … .” (Piotr Sobolczyk, Slavic Review, Vol. 78, 2019)

“Throughout the book, Szulc amasses and interprets a diverse, astonishingly rich selection of resources. … Szulc’s book is a much-needed introduction to an emerging field of study – a reliable source of diverse historical records, a go-to volume when researching aspects of homosexuality in communist Eastern Europe and, in itself, certainly a fascinating story.” (Aleksandra Gajowy, LSE Review of Books, blogs.lse.ac.uk, December, 2017)
“In documenting and analysing the transnational orientation of gay and lesbian magazines in communist Poland, Lukasz Szulc challenges the dehistoricization of lesbian and gay lives within research on Poland sexual politics. Adopting a transnational lens to examine same sex identities and politics in Poland, this book constitutes an important contribution to studies of the global and transnational politics of sexualities, as well as current debates about the geopolitics of the region within sexuality studies.” (Jon Binnie, Reader in Human Geography, Manchester Metropolitan University)

“Transnational Homosexuals in Communist Poland is an important, cogent and provocative study. Providing a rich account of the Central and Eastern European and Polish homosexual, it challenges mainstream assumptions, and provides new and original materials to advance understanding of Polish homosexual life. It gets this exciting book series on Global Queer Politics off to a promising start.” (Ken Plummer, Professor of Sociology, University of Essex, UK)

“A marvellously innovative addition to our understanding of the history of sex rights activism and to the history of Poland under and after communism, Szulc’s book uses fascinating primary sources and challenges numerous misconceptions.” (Dagmar Herzog, Professor of History, City University of New York, USA)

“Neither romanticizing nor underplaying the complex realities of gay and lesbian life in Central and Eastern Europe, Szulc’s sophisticated and empirically grounded account contributes to a fuller understanding of the past that is particularly valuable as we face a challenging future.” (Larry Gross, Professor of Communication, University of Southern California, USA)

“An impressive contribution to the LGBT+ history of Poland, and a must-read for scholars of social movements, underground publishing and gay and lesbian identities in late socialist Central and Eastern Europe.” (Josie McLellan, Professor of History, University of Bristol, UK)

“This is a thoroughly well-researched work, framed in the myths of the sexual Cold War. It draws on gay and lesbian magazines and interviews with authors as well as ILGA archive material to trace Polish LGBT activism through the last decade of communist rule, including the years of martial law and the emergence of Solidarność movement. Details are given of the shocking events surrounding Operation Hyacinth, a major effort of state surveillance on behalf of the Polish police to create lists of gays.” (Judit Takács, Research Chair, Hungarian Academy of Sciences, Hungary)

“This book is social science at its best: unmasking myths about homosexuality in former communist countries. Based on careful reading and analysis of gay and lesbian magazines, Szulc shows us the importance of transnational aspects of emerging homosexual identities and politics in Poland at the twilight of the Cold War. A must read!” (Jan Willem Duyvendak, Professor of Sociology, University of Amsterdam, the Netherlands)