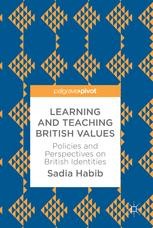 Policies and Perspectives on British Identities

This book engages with important debates about multicultural British identities at a time when schools are expected to promote Fundamental British Values. It provides valuable insight into the need to investigate fluid and evolving identities in the classroom. What are the implications of Britishness exploration on young people’s relationships with and within multicultural Britain? What are the complexities of teaching and learning Britishness?  Emphasis on student voice, respectful and caring dialogue, and collaborative communication can lead to meaningful reflections.  Teachers often require guidance though when teaching about multicultural Britain. The book argues that when students have safe spaces to share stories, schools can become critical sites of opportunity for reflection, resistance and hopeful futures.

Sadia Habib is an independent researcher, and completed her PhD at Goldsmiths, University of London, UK. She has experience teaching 11-18 year old students in multicultural schools and colleges in the UK.

“Sadia Habib’s book Learning and Teaching British Values: Policies and perspectives on British identities is an insightful nosedive into how art education has the capacity to challenge the hegemonic and exclusionary identities that might be promoted under schools’ duty to uphold British values. … This book would be useful for researchers in art education who wish to see how critical pedagogies have been adopted when embedding British values teaching into the art curriculum.” (Gemma Gronland, London Review of Education, Vol. 17 (1), 2019)

“Sadia Habib's book has a rare quality that combines both searching criticism of education policy and a capacity to describe schools as they really are. She somehow listens with openness to young people without damning or ridiculing them, even when their voices are distorted by racism and bigotry.  A truly wonderful achievement and an essential read for everyone who cares about Britishness.” (Les Back, Professor of Sociology, Goldsmiths, University of London, UK)

“What Sadia Habib challenges in this book is the passive or static view of Britishness—one that is diminished and emaciated, and that represents an imposed, imperial, hegemonic and partial view of an ‘officially constructed patriotism’, created by powerful elites. In its place, she passionately argues for a more activist and dialogical view of Britishness, that is at the same time more authentic, inclusive and attentive to the lives and experiences of British students, their families, neighbourhoods, teachers and schools. This is a much needed and overdue antidote to the dominant patriotic rhetoric.” (John Smyth, Visiting Professor of Education & Social Justice, University of Huddersfield, UK & Emeritus Research Professor of Education, Federation University Australia)

“Many teachers remain confused by the requirement to promote British values, and this is reflected in the narrow, reductive and stereotyped ways that ‘Britishness’ is being presented in some schools. This timely book by Sadia Habib is one of the first publications to engage teachers in an in-depth discussion of the issues raised by the British values agenda. It will give practitioners the confidence to open up discussion with children and young people in schools, explore their diverse identities and validate the many ways of belonging in modern Britain.” (Bill Bolloten, independent education consultant)

“This is a bold and timely book that recognises the crucial importance of both teachers and students having the courage to question and interrogate their perceptions of British Values and scrutinise the lens through which they see British Identities. Sadia Habib has given prominence to the ideas and thoughts of both young people, trainee teachers and in-service teachers by adopting a critical pedagogy philosophy and this is both heartening and hopeful in the current educational climate. An inspiring read!” (Vicky Macleroy, Head of the Centre for Language, Culture and Learning, Goldsmiths, University of London, UK)

“Recent debates on Britishness as a form of cultural monism has become a ubiquitous feature in the way neoliberal education positions itself within the backdrop of Brexit, demands for Scottish independence and the fear of the Muslim ‘other'. This book makes a timely and a much needed  contribution to the recent debates associated with Britishness and Fundamental British Values. Sadia’s approach is rich in theory whilst having a firm grounding in empirical research. By drawing upon the tradition of Critical Race Theory and Critical Pedagogy, Sadia is skilfully able to show how pupils and also school teachers are able to contest, disrupt and challenge the normative ideas linked to Britishness. This book is a must read for students, teachers and scholars alike.” (Shamim Miah, Senior Lecturer in Education, University of Huddersfield, UK)

“This book is an important and incisive work for any moment in history, but has become urgent in the current international season of rising nationalism and eroding public institutions. Habib offers a powerful argument for formal education to embrace critical pedagogy as a mechanism for bolstering democracy and individual liberation, and as an antidote to toxic nationalism masked as educational standards.” (Paul Thomas, Professor of Education, Furman University, USA)

“Sadia Habib has made a major contribution through her close analysis of the often uneasy relationship between pedagogy and national identity.  This remains a complex and contentious topic.  I was particularly drawn to the use of arts-based research approach alongside critical pedagogies to unearth social inequalities and injustices.  The words of the teachers and students remained with me long after I put down the book.  This is required reading for those interested in Britishness and fundamental British values.” (Garth Stahl, Senior Lecturer in Education, University of South Australia)

“This important new book challenges the imposition of “fundamental British values” as a cover for racist and Islamophobic ideologies and imperial nostalgia. Rather than being indoctrinated with “British values”, the author shows how young people can use artistic creativity to explore the cultural complexity of growing up British. This book is illuminating in its use of theory and intensely practical.” (Terry Wrigley, Visiting Professor at Northumbria University and Editor of the journal Improving Schools)