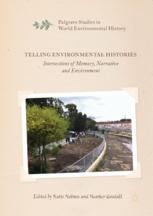 Intersections of Memory, Narrative and Environment

This collection explores the intersections of oral history and environmental history. Oral history offers environmental historians the opportunity to understand the ways people’s perceptions, experiences and beliefs about environments change over time. In turn, the insights of environmental history challenge oral historians to think more critically about the ways an active, more-than-human world shapes experiences and people. The integration of these approaches enables us to more fully and critically understand the ways cultural and individual memory and experience shapes human interactions with the more-than-human world, just as it enables us to identify the ways human memory, identity and experience is moulded by the landscapes and environments in which people live and labour. It includes contributions from Australia, India, the UK, Canada and the USA.

Katie Holmes is Director of the Centre for the Study of the Inland, La Trobe University, Melbourne, Australia. Her work in oral and environmental history seeks to understand the experience of Australian settlement, and integrates gender history, cultural history and literary studies. She is the author of Spaces in Her Day: Australian women’s diaries of the 1920s and 1930s (1995) and Between the Leaves: Stories of Australian women, writing and gardens (2011) and co-author of Reading the Garden: the settlement of Australia (2008), as well as numerous edited collections.

Heather Goodall is Professor Emerita of History at the University of Technology Sydney, Australia. She has published on Indigenous histories and environmental history in Australia and on colonialism and decolonisation in the 20th century in the eastern Indian Ocean. She has worked in collaborative projects with Indigenous people, published as Invasion to Embassy: Land in Aboriginal Politics, (1996), and the co-authored Rivers and Resilience: Aboriginal People on Sydney’s Georges River, (with Allison Cadzow, 2009); Isabel Flick: the many lives of an extraordinary Aboriginal woman, (with Isabel Flick, 2005); and Making Change Happen (with Kevin Cook, 2013).
Show all
Reviews

“This exciting collection has much to offer both oral historians and environmental historians who seek bold and innovative ways to listen to people in place, and to places over time.” (Ruth A. Morgan, Oral History Australia Journal, Vol. 41, 2019)