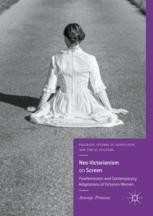 This book broadens the scope of inquiry of neo-Victorian studies by focusing primarily on screen adaptations and appropriations of Victorian literature and culture. More specifically, this monograph spotlights the overlapping yet often conflicting drives at work in representations of Victorian heroines in contemporary film and TV. Primorac’s close analyses of screen representations of Victorian women pay special attention to the use of costume and clothes, revealing the tensions between diverse theoretical interventions and generic (often market-oriented) demands. The author elucidates  the push and pull between postcolonial critique and nostalgic, often Orientalist spectacle; between feminist textual interventions and postfeminist media images. Furthermore, this book examines neo-Victorianism’s relationship with postfeminist media culture and offers an analysis of the politics behind onscreen treatment of Victorian gender roles, family structures, sexuality, and colonial space.

“Primorac’s monograph is a timely and thought-provoking study in so far as it not only discloses the major role TV and film adaptations have played in defining twenty-first-century conceptualizations of Victorian femininity but also, and perhaps even more importantly, addresses a striking imbalance in the field of neo-Victorian studies at large.” (Marlena Tronicke, Symbolism, October, 2018)​

“Neo-Victorianism on Screen is a timely and welcome addition to the scholarship in adaptation of nineteenth-century literature and culture. The author’s deft feminist analysis of a wide array of texts adds greater weight and direction to the study of neo-Victorian adaptations, producing an extended and nuanced analysis of postfeminist culture and representation and the appropriation of literary figures. The author’s early definition of the scope of neo-Victorianism on screen as understood here is hugely useful and a suitable provocation for the scholarly community (and students) who will read it.” (Imelda Whelehan, Dean of Higher Degree Research, The Australian National University, Australia)

“Antonija Primorac offers a compelling analysis of the postfeminist dynamics implicit in screen representations of Victorian women. In a book that covers an impressive range of film and TV productions shown between 1993 and 2016, Primorac provides rigorous and illuminating readings that offer genuinely fresh perspectives on gender and on our own contemporary investment in what she terms the ‘neo-Victorian imaginarium’. A ‘must-read’ for scholars of neo-Victorianism, feminism, and adaptation studies.” (Patricia Pulham, Professor of Victorian Literature, University of Surrey, UK)

“Covering the period from the early 1990s to 2016, Antonija Primorac's study is both timely and intellectually astute. Ranging across a diversity of adaptations on film and on the small screen, the detailed analyses of pertinent themes take in a variety of topics from the corseted and empowered woman to colonialism, the role of the female director, and the orientalisation of costume and fashion. Around it all sits the looming presence of both the youthful and ageing Queen Victoria herself, which is given full attention in the final chapter. The richness of readings in Neo-Victorianism on Screen makes this an engaged and engaging intervention in the growing field of neo-Victorian studies. By placing her discussion of neo-Victorian adaptation into dialogue with postfeminism, Primorac provides a stimulating and intriguing re-imaging of both critical and cultural assumptions around revisioning and reinterpreting as nostalgic acts.” (Mark Llewellyn, Visiting Professor of English, University of Strathclyde and Consultant Editor to Neo-Victorian Studies)

“Readers are welcomed to the ‘neo-Victorian imaginarium’ in Primorac’s confident study of adapting the Victorians for contemporary big and small screens. Reading a broad range of examples from the BBC’s Sherlock series to the mash-up of Penny Dreadful and from Tim Burton’s neo-Victorian aesthetic to Hollywood adaptations of Victorian novels, Primorac investigates the challenges of representing the Victorian woman and the diverse, sometimes contradictory, cultural work she does for the postfeminist present. This book is an important addition to neo-Victorian and adaptation studies in the mirror it holds up between the Victorian past and the contemporary female subject.” (Elizabeth Ho, Assistant Professor of English, University of Hong Kong)