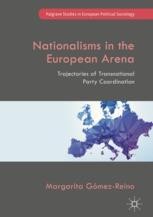 Nationalisms in the European Arena

Nationalisms in the European Arena will be of interest to students and scholars across a range of disciplines including sociology and political science. It contributes to the increasing literature on identity politics in the European Union and reveals the mechanisms behind why the European arena is adverse to the political translation and organization of domestic nationalisms as distinctive European actors.

“Analyses on nationalist parties and European integration have focused either on statewide populist parties or on minority political actors. Gómez-Reino’s book has the special interest of comparatively studying the programmatic positions and institutional strategies of these two types of actors. In so doing, Gómez-Reino has contributed an innovative, encompassing, and enriching study of the intertwining logics of nationalism and political contestation in Europe.” (Iván Llamazares, Universidad de Salamanca, Spain)