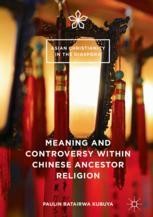 Chinese practices related to ancestors have long been the subject of conflicting interpretations. These practices are rooted in the lived experience of practitioners, and therefore need to be considered as embodied expressions of the quest for existential meaning. For practitioners, the achievement of existential meaning requires the inclusion, implication, and mediation of the ancestors. When gestures in ancestor rites are analyzed from this perspective it is possible to appreciate their essence as constitutive of “ancestor religion.” This book uses an inquisitive method that investigates the discrepancies between foreign and local explanations, and proposes another hermeneutic framework for ancestor related praxes.

“Paulin Batairwa Kubuya’s book is very valuable … . It provides a very helpful overview of the extended debates about ancestor religion in Christianity, including a review of recent scholarship and practical approaches from Hong Kong and Taiwan.” (Amy O’Keefe, Review of Religion and Chinese Society, Vol. 7, 2020)
“This book is well written and edited. Part of Palgrave’s ‘Asian Christianity in the Disapora’ series, it indeed demonstrates the significance of the ancestors in Chinese Christianity and has relevance for many communities. By developing the study of Chinese ancestor religion, Batairwa Kubuya provides focus and punch, proposing a new way of interpreting the ancestors for Christians and others.” (Jonathan A. Seitz, Reading Religion, readingreligion.org, September, 2018)
“Paulin Batairwa Kubuya builds a refined hermeneutical space in which he reconsiders various interpretations, both local and foreign, of ritual practices for the ancestors within the context of Chinese religion. By locating these practices in a wider intercultural setting, through the use of numerous examples drawn from Christian traditions and African religiosities, the book is a valid contribution, from an interdisciplinary and comparative perspective, that sheds new light on a complex, though fascinating, topic.” (Alessandro Dell’Orto, Urbaniana University Centre for Chinese Studies, Rome, Italy) “Meaning and Controversy in Chinese Ancestor Religion focuses on Chinese ancestor related praxes in the context of a hermeneutic of contacts between cultures and religions. It is an important contribution to the study of Chinese religion that will help all religious scholars to rediscover the subtleties and significance of ancestor related praxes.”  (Yi-Jia Tsai, Fu Jen Catholic University, Taiwan)

“This is an indepth and diligent examination of issues of ancestor worship in China. It draws on the author's critical reading and insights as an African intellectual. The whole book is thought-provoking, and the conclusion as well, when it states that ancestor worship is more correctly to be called ‘ancestor religion,’ and that it is here to stay even in the world of modernity.” (Umberto Bresciani, Fu Jen Catholic University, Taiwan)