The Theories, Concepts and Practices of Democracy
Free Preview 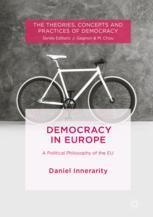 A Political Philosophy of the EU

This book calls for a philosophical consideration of the development, challenges and successes of the European Union. The author argues that conceptual innovation is essential if progress on the European project is to be made; new meanings, rather than financial or institutional engineering solutions, will help solve the crisis. By applying a philosophical approach to diagnosing the EU crisis, the book reconsiders the basic concepts of democracy in the context of the complex reality of the EU and the globalised world where profound social and political changes are taking place. It will be of interest to students and scholars interested in EU politics, political theory and philosophy.

Daniel Innerarity is Professor of Political Philosophy at the University of the Basque Country and the Ikerbasque Foundation for Science, Spain, and Professor in the School of Transnational Governance, European University Institute of Florence, Italy.

“There is a paradox in the complex relationship between European integration and democracy. It is well-known that the transfer of powers to supranational institutions weakens national democracies. On the other hand, more than any other international organization, the European Union has endeavored to democratize its own procedures. To make sense of these issues, a combination of strong normative and analytical thinking is required.  This very timely book does a fine job of analyzing the current problems and suggesting ways forward.” (Renaud Dehousse, President of the European University Institute of Florence, Italy)

“In his wonderful  book, Daniel Innerarity reminds us that government and democracy beyond the state is a complex affair if we are not simply to reproduce the national model. And in doing so he manages to make the EU’s complexity simple and its current predicament solvable. A feat!” (Professor Kalypso Nicolaïdis, University of Oxford, UK)

“Europe needs theory, or rather political philosophy. Given this provocative premise, Daniel Innerarity develops a brilliant argument aimed at overcoming the crisis of the European Union. We need a new narrative capable of taking up the challenge, posed by Europe, to rethink democracy in its complexity, beyond the nation-state model.” (Professor Elena Pulcini, University of Florence, Italy)

“The project of European integration has been pursued without an agreed identification of its finalitè. When crises exploded, European leaders did not know how to deal with them. In Brussels, their strategy was muddling-through, in national capitals their narrative was TINA (there is no alternative). The “bicycle approach” to European integration continues to be the unofficial philosophy of the EU. As Daniel Innerarity argues persuasively in this book, it is time to go beyond a mere ‘processual’ view of the EU. The question is not the depth of the integration but the quality of European democracy.” (Sergio Fabbrini, Director of the LUISS School of Government, Rome, Italy)

“Discussions of the state of the EU across all sub-disciplines of “European studies” are increasingly characterised by irritated signals of helplessness. What Europe needs at its core is a theoretical moment extensive enough to give an indication of its future. Innerarity’s political philosophy excels through its synthesising of technically detailed and theoretical innovative reconstructions of present impasses; reconstructions which reveal encouraging and democratically legitimate potential.” (Professor Christian Joerges, Hertie School of Governance, Germany)

Book Title
Democracy in Europe
Book Subtitle
A Political Philosophy of the EU
Authors
Series Title
The Theories, Concepts and Practices of Democracy
Copyright
2018
Publisher
Palgrave Macmillan
Copyright Holder
The Editor(s) (if applicable) and The Author(s)