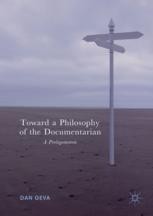 Toward a Philosophy of the Documentarian

Dan Geva is a longstanding documentarian.  He is a senior lecturer in documentary studies in Beit-Berl College and a research fellow at Haifa University, Israel.

“Philosophers, like the rest of us, enjoy the movies, but seldom has a philosophic approach yielded a more fruitful expansion of our understanding than does Dan Geva’s rich examination of what the documentary-filmmaker can gain from absorbing philosophy. The book begins with a discussion of the Lumières’ Arrival of the Photographers. Toward a Philosophy of the Documentarian marks the arrival of the philosophic factual filmmaker at the documentary studies' landing-stage.” (Brian Winston, University of Lincoln, UK)

“Dan Geva's bold and original new book develops a multi-faceted theory of the documentarian, synthesizing philosophical, semiotic, psychoanalytic, and documentary theory perspectives. Marshalling the insights of Heidegger and Nietzsche, Lacan and Peirce, and focusing on documentary 'exemplars' such as Flaherty, Grierson, Vertov, and Ivens, Toward a Philosophy of the Documentarian offers a provocative challenge to film theory, and promises to provoke thought and debate over the very concept of documentary itself.” (Robert Sinnerbrink, Macquarie University, Australia)

“Since the Lumières and Méliès, since Vertov, Flaherty, and Grierson, cinema theorists and philosophers have been laboring to adjudicate the nature, meaning, and significance of ‘documentary’ film. A much less discussed companion to this century-old conversation is the definition of the documentarian herself. At last we have in hand Dan Geva’s bold, sincere, and committed endeavor to provide a theory of this figure—or, in a phrase reflecting his humility and humanity, a gesture toward such a theory. Geva attempts a striking proposal, namely: a philosophy of the documentarian that brings together the metaphysical, ethical, and aesthetic components of her presence in the world. Even as Geva’s radical labor of intellectual and disciplinary synthesis does, in fact, provide just such a philosophy, it also generously invites us to think further, with him, toward an evolving philosophy of the documentarian.” (David LaRocca, Visiting Assistant Professor, Cinema Department, Binghamton University and editor of The Philosophy of Documentary Film: Image, Sound, Fiction, Truth)

“At a time when the popularity of the documentary film is swiftly growing all over the world, the need for a true step Toward a  Philosophy of the Documentarian has never been more urgent or relevant.  Dan Geva delivers a definitive epistemological, ontological, and theoretical analysis of the documentarian impulse -- from the vision of the earliest practitioners to the most current critics and thinkers -- a groundbreaking exploration that will reverberate in film studies classes for decades to come.” (Alan Berliner, Filmmaker, USA)