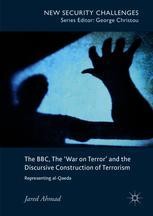 The BBC, The 'War on Terror' and the Discursive Construction of Terrorism

In the years since the September 11th 2001 attacks, the al-Qaeda phenomenon has become one of the most written about, yet crucially misunderstood, threats of the 21st century. But despite the sheer volume of literature produced during the ‘war on terror’ period, few studies have sought to consider the way this entity has been represented within the news media.  The BBC, the War on Terror and the Discursive Construction of Al-Qaeda addresses this significant gap in knowledge by providing an original and much needed assessment of the various strategies used to depict ‘al-Qaeda’, and thus make it meaningful for British television audiences. Drawing on the work of French philosopher Michel Foucault, and focusing on Britain’s most watched and trusted news programme, the BBC’s flagship ‘News at Ten’ bulletin, the book provides insight into both the visual and verbal nature of these representations and the way they have shifted over the course of a ten-year period, while also shedding light upon the broader political and social consequences of the BBC’s portrayals. In doing so, the book not only helps to develop a deeper understanding of the complexity of the BBC’s representations, and their various shifts and transformations, but also details the process through which ‘al-Qaeda’ has been pieced together from a range of cultural parts. And how, ultimately, the dominant mode of representation used to portray this entity is one that closely resembles Britain’s own, diverse multicultural ‘self’.

​Jared Ahmad is a lecturer in Journalism, Politics and Communication at the University of Sheffield, UK.

“There’s never been a greater need to understand the evolving, complex role of the media in the war on terror, and there’s no better book today for this vital task than Representing Al-Qaeda. Dynamic, sophisticated and balanced in its assessment of the BBC’s terrorism-related coverage, this book provides much-needed insight and analytical nuance to the typical denunciations of the BBC’s bias. Essential reading for anyone interested in al Qaeda, terrorism, the media and the war on terror.” (Professor Richard Jackson, University of Otago, New Zealand, and Editor of Critical Studies on Terrorism and author of “Writing the War on Terror: Language, Politics and Counter-Terroris”)

"Thought-provoking and rigorous, Ahmad's book is an original and useful contribution to our understanding of how the phenomenon of Islamist extremist violence has been portrayed in the media, and how that portrayal has impacted on policy and public conversations. It will be useful for specialists of security studies looking to broaden their perspectives, and specialists of media studies searching for a serious investigation of one of the most pressing issues of our time."  (Jason Burke, Guardian Africa Correspondent, and author of The New Threat From Islamic Militancy and Al-Qaeda: The True Story of Radical Isla)

“Ahmad documents the rise of security journalism in the UK during the war on terror. In a time marked by uncertainty and anxiety, Ahmad shows how BBC News struggled to offer informed reporting on Al-Qaeda, adding to a public sense of diffused threat. This important research should be read by journalists, citizens and scholars, for we face the same struggle to make sense of ISIS now and we will face other obscure and shifting threats in the future.”  (Professor Ben O’Loughlin, Royal Holloway University, and author of Television and Terror: Conflicting Times and the Crisis of News Discours)